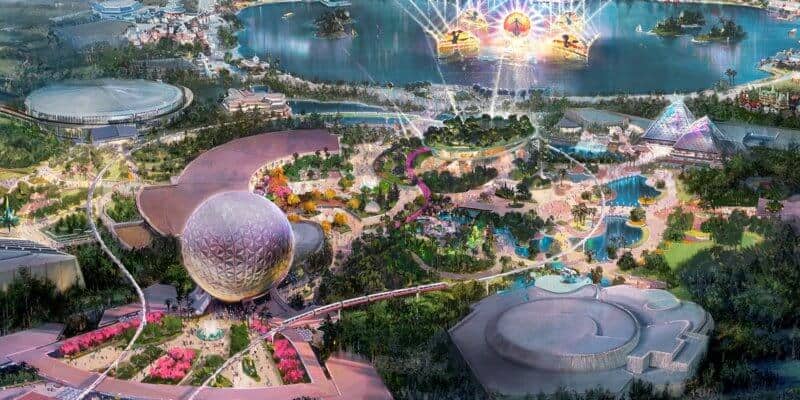 EPCOT has been undergoing a complete overhaul for quite some time now. One of the big changes happening at EPCOT is the debut of three brand-new lands, replacing what is currently known as Future World. These three new lands will allow all of EPCOT to feel connected with four neighborhoods that speak to each important aspect of the world.

World Showcase, which has already been a part of this Park, will be joined by World Celebration, World Nature, and World Discovery. The construction on these three lands has been ongoing, and now, we have an official debut date for when these lands will open — and it is way sooner than you may think!

Despite the ongoing construction and unfinished projects, Disney will officially debut these new neighborhoods on October 1, 2021 — which is also the beginning of Disney World’s 50th anniversary.

Per the official Disney announcement:

Walt Disney once said EPCOT “would always be in a state of becoming” as a place that changes with the times. The Walt Disney World Resort theme park is delivering on that promise in a whole new way as it continues the biggest transformation in its history, bringing the next generation of immersive storytelling to life through a plethora of new attractions and experiences.

Beginning Oct. 1, 2021, EPCOT will be unified with four neighborhoods that each speak to important aspects of the world and its people: World Showcase, World Celebration, World Nature and World Discovery. These neighborhoods are filled with new experiences rooted in authenticity and innovation that take guests to new destinations, where the real is made fantastic in a celebration of curiosity, discovery and the magic of possibility.

Guests can visualize these exciting plans for EPCOT at Walt Disney Imagineering presents the EPCOT Experience in the Odyssey Events Pavilion. Here they discover an exhibit showcasing the relentless innovation, energy and excitement driving the park’s future throughout this period of transformation. More information on other previously announced experiences coming to EPCOT will be provided at a later date.

Are you excited to see EPCOT officially unveil the new neighborhoods? Let us know in the comments below.

Do you want to visit EPCOT on your next family vacation? Start planning your magical trip today by clicking here.