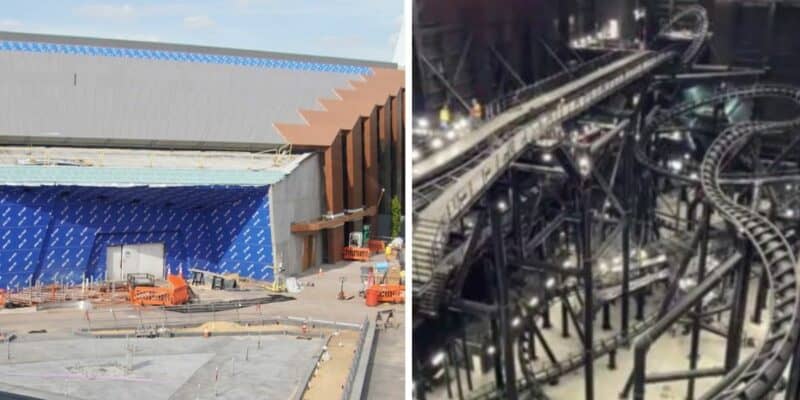 Over the next couple of years, Walt Disney World Resort will surely have Guests flocking to Orlando. Not only is the 50th anniversary around currently in place for the next 18 (now, almost 17) months, but two massive attractions are hurrying to the finish line.

At Magic Kingdom, Guests are anxiously anticipating the opening of TRON Lightcycle Run, which has yet to have an opening date announced. At EPCOT, Guardians of the Galaxy: Cosmic Rewind is the talk of the town! The new coaster will bring the Marvel characters and storyline to life in an all-new, spinning indoor coaster that gives Guests a full story while they experience high-speed thrills. This will be the second Guardians of the Galaxy-themed attraction at Disney Parks in the U.S., the first being Guardians of the Galaxy – Mission: BREAKOUT! at Disney California Adventure at Disneyland Resort.

When looking at the outside of the attraction, Guests will see that there are plenty of construction walls surrounding the building. And, if we look at the exterior of the building itself, we will see that it still seems as if it has a lot of work that needs to be done. Bioreconstruct recently posted a photo of the attraction’s exterior, which shows that the roof still has work that needs to be done, as well as the entire entry into the building.

Current look at one side of Guardians of the Galaxy. Note also that the roof work is about to start on the top row.

Current look at one side of Guardians of the Galaxy. Note also that the roof work is about to start on the top row. pic.twitter.com/UprJsy3bbu

Looking at this photo, one may assume that we are still a long way away from riding the coaster, but the outside is deceiving when it comes to this attraction’s progress. During the 50th anniversary media event, we were able to take a first look inside the show building. No photos were allowed to be taken, but the inside of the attraction looks nearly complete. The tracks are fully set up, screens are in place, there did not seem to be active work being done, and all that appears to be needed is the ride vehicle on the tracks.

As we have noted, this will also bring an all-new pavilion to EPCOT! Now, Guests will be able to enjoy the World Showcase pavilions and see the details of the countries, as well as see Xandar brought to life as the planet and its Nova Corps have decided to establish EPCOT’s first “Other-World Showcase” pavilion.

We are still awaiting an opening date for the coaster, but rest assured that even if it seems that the outside still has some work to be done, the actual attraction itself is a lot farther along than the facade.

Are you excited to see Guardians of the Galaxy: Cosmic Rewind? What questions do you have about the coaster that we can answer, having seen it already?