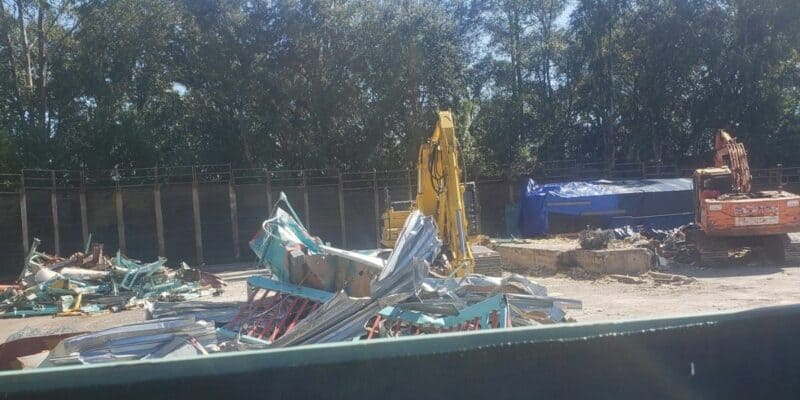 If you have been to Disney’s Animal Kingdom at Walt Disney World over the past few months, you have likely noticed a few changes!

With the 50th anniversary in tow, the Tree of Life is now illuminated at night with its Beacon of Magic. On top of that, a new daytime show, Disney KiteTails, has also debuted! Although there is a lot of new and unique aspects to the Park, there are also some offerings, or in this case, an attraction that is being taken away.

Related: Disney World Brings Back Extinct and Demolished Attraction For One Weekend

We have known that Primeval Whirl in DinoLand USA has been closed down permanently for quite some time now. Over the past few months, we have been tracking the demolishment of the coaster as its tracks slowly began to be torn down. Recently, the area looked like a massive construction zone full of abandoned parts, but now the area behind the construction walls looks a lot cleaner.

As we can see on Twitter, Shaun Like the Weather Here (@rankingthemouse) has recently posted two photos of the construction zone. Here, we can finally see the majority of the ground for the attraction as a lot of the scrap, and coaster tracks have been cleared away.

As of late, it seems that the demolishment and removal process has been speeding up, likey to ensure that Guests are not walking by a very noticeable construction zone for too long. Right now, we are not sure what this space will be used for once all of the coaster is removed. Of course, the possibility of a new attraction is there; however, Disney has not released nor hinted towards that, and it is purely a speculative idea.

Some fans have thought that this could be the beginning of the end for DinoLand USA. However, there are still other attractions themed to the area, like the popular DINOSAUR! ride, which has not been permitted to have any work done or scheduled for any closures. Therefore, it seems unlikely that the land as a whole would disappear, especially since Disney has not mentioned this idea in any capacity.

If you never had the chance to experience Primeval Whirl before its demolition, the official Disney description read:

What would you like to see take over the space where Primeval Whirl used to be? Let us know in the comments below!