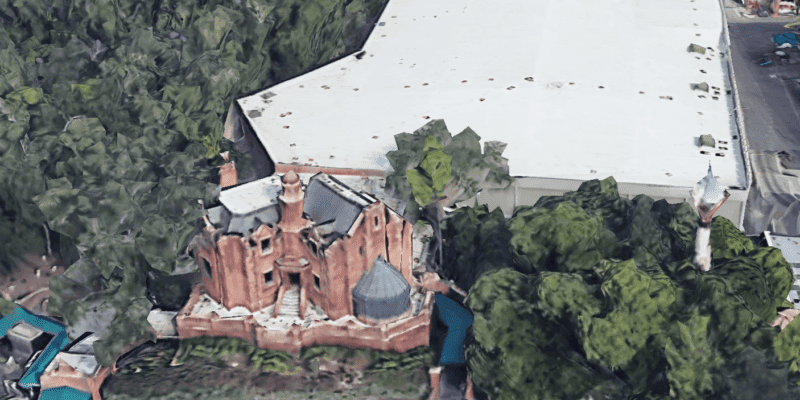 Filled with grim grinning ghosts, singing busts, wall-to-wall creeps, hot and cold running chills, and of course, the Ghost Host, the Haunted Mansion, located at both Walt Disney World and Disneyland, draws in Guest after Guest as they visit the 999 happy haunts.

But did you know that a majority of the Haunted Mansion ride actually does not take place inside the Mansion, and instead, inside a different building?

That’s right — Haunted Mansion, at both Walt Disney World and Disneyland, has a massive show building which is where a majority of the ride actually takes place. If you are not familiar with what a show building is, these are created by Disney Imagineers and are a necessity to house an attraction that lasts as long as, say, Splash Mountain, The Haunted Mansion, or Pirates of the Caribbean without taking away from the attraction’s facade.

Basically, rides such as Haunted Mansion need a lot more space to tell the full story, but utilizing giant industrial-looking buildings are, of course, not pleasant to look at and will take away from the theming that Disney is known for. So, in order to make this work, these show buildings are often hidden from Guests’ views to preserve the Park’s magic.

Even though you cannot see these show buildings while standing inside the park — you can see them from a bird’s eye view, such as on Google Earth!

For starters, let’s visit Haunted Mansion in Magic Kingdom at Walt Disney World. Many think that the ride takes place inside the Mansion,and while part of it does (such as the pre-show stretching room), a majority of the ride actually takes place in that massive white show building located behind the Mansion, as seen in the image above.

We can see where the Mansion sits in correlation to the show building a bit better in the images above as we look at it from a different angle.

Haunted Mansion in Disneyland also has a massive show building located behind the actual Mansion, which you can see in the image above. The show building sits right behind the Mansion but is covered by trees and bushes so that Guests standing inside the Park do not notice the building at first glance.

In this second image (above) we can really see just how big the show building is, which is where a majority of the ride takes place!

More on Haunted Mansion at Disneyland

Did you know about the massive show buildings that Haunted Mansion uses? Let us know in the comments below.