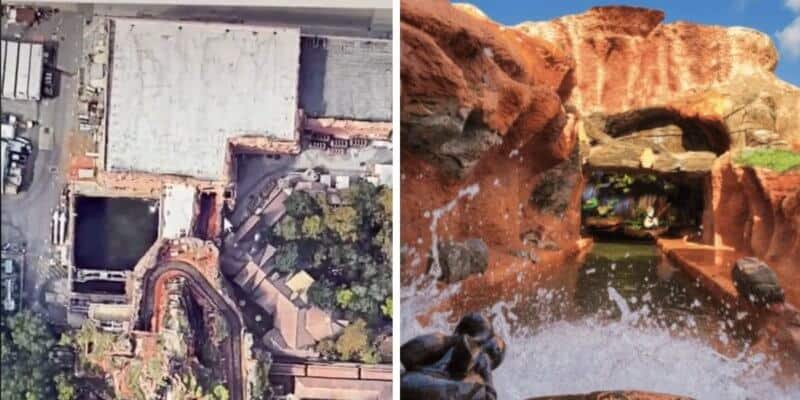 At Disney World, Splash Mountain is a top-rated Magic Kingdom attraction that not only encompasses thrills and a splash but a long ride track in which Guests can truly be transported.

For anyone who rides Splash Mountain for the first time, they will likely be quite shocked after discovering the first drop is not the big one seen from the exterior of the attraction. In fact, the attraction is around 10 minutes long, where Guests go through various show scenes, which include adventures with Br’er Rabbit as he escapes the antics of Br’er Fox and Br’er Bear.

Even though the mountain looks massive, to house an attraction that lasts as long as Splash Mountain, much like The Haunted Mansion, there are hidden show buildings behind the attraction’s facade. Considering these rides need a lot more space, but giant industrial-looking buildings are not too pleasant to look at, these buildings are often hidden from Guest view to preserve the park’s magic.

Now, thanks to TikTokers The Mouselets (@themouselets), we can take a look behind Splash Mountain.

As you can see in the video, the attraction’s show building is far larger than the attraction itself, but Guests would never be able to tell!

The TikTok also noted a hidden Mickey on the exterior of Splash Mountain, which can be found at the very top of the drop. In case you missed it, take a look below! On the right side, you can see a profile of Mickey Mouse.

Splash Mountain will undergo a reimagining to transform the attraction into a Princess and the Frog water ride. Although we do not know much about the ride, it seems that the ride track will likely remain quite similar, as the exterior of the ride will remain the same according to Disney’s concept art. If the track stays as is, this will mean the show building will continue to be used for the attraction, which would be great news as that means the ride will still be long and full of immersive storytelling!

What other attractions do you think to have a secret building hidden from Guest’s sight?