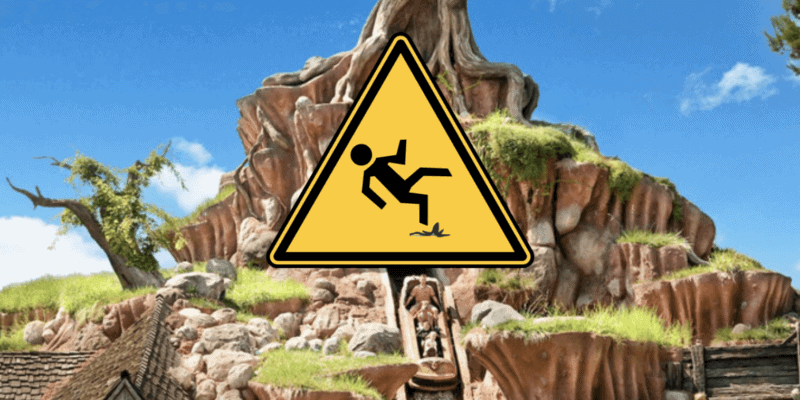 Splash Mountain has been in the news frequently of late with the attraction’s upcoming retheme, but the most recent story about the popular Disney Parks ride has nothing to do with Princess Tiana.

TikTok user @_parkerdanielle shared a 12-second video to the social media platform with the caption “CEO of falling into the water on Splash Mountain.” The video was shared last week, so note that this did not occur today.

Although the TikTok video doesn’t go into detail about what happened to Danielle, it appears that Splash Mountain may have broken down and Guests were being escorted off. This is fairly common in Disney theme parks around the world.

It is worth noting that Danielle was fine after making a literal “splash” and commented, “this would only happen to me…SO embarrassing.” The comments on her video have since been shut off.

The short social media video cuts off as Danielle slips into the log flume ride’s waterway, but she was presumably assisted by Disney World Cast Members. We’re glad this Disney Park Guest is safe. Mishaps can happen at Disney Parks and Cast Members are always there to quickly assist, but it’s important to keep in mind that rules are in place for the safety of all Guests.

What’s next for Splash Mountain?

With the recent news that Splash Mountain will be getting a Princess and the Frog redesign, fans of the ride are wondering what’s next. Although there is currently no official timeline for the re-theming project at Walt Disney World Resort or Disneyland Resort, Disney park goers can assume that the current Song of the South theme will be removed sooner rather than later.

Former Disney World President Josh D’Amaro recently spoke out about the retheme, stating that it has been in the works for well over a year. Referring to Lead Imagineer Charita Carter, original Imagineer Tony Baxter, and the rest of the team behind the Splash Mountain redesign, D’Amaro said:

“I keep using the same word, but I’m really proud of this team and what we’re doing on this front. I think Splash Mountain, no doubt, is a sacred attraction to many of our guests. And I think you’re going to love what we’re doing in making the attraction even more contemporary.”

What do you think about the TikTok video of a Disney Guest falling into Splash Mountain? Share your thoughts about the video in the comments!

Contact the Academy Travel team to plan your next visit to any theme park at Walt Disney World. Magic Kingdom Disney‘s Hollywood Studios, EPCOT, and Animal Kingdom are all open to the public once again!