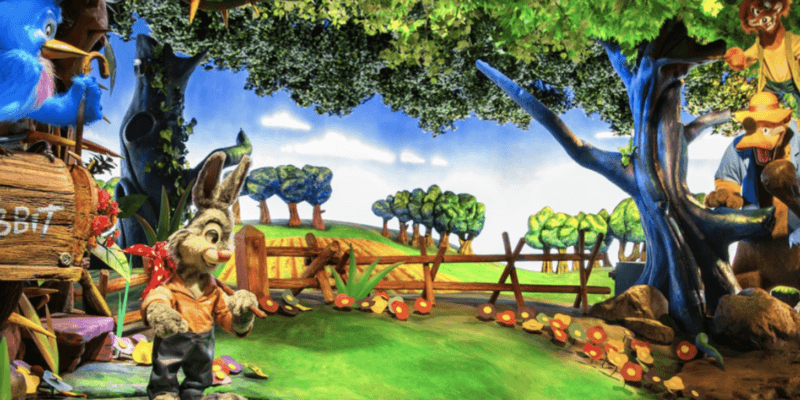 Last year, when The Walt Disney Company announced that Splash Mountain would be rethemed at both Walt Disney World Resort in Orlando, Florida and Disneyland Resort in Anaheim, California, Disney Parks fans were divided about the news, to say the least.

The ride — which has been themed to Song of the South (1946) since it opened at Disneyland in 1989 and Magic Kingdom in 1992 — will get new theming taken from Walt Disney Animation Studios film The Princess and the Frog (2009).

While this new theme featuring Princess Tiana, Naveen, Ray, and all of their bayou friends actually works well at Disneyland Park (thanks to Splash Mountain’s close proximity to New Orleans Square), it could seem a bit random in Magic Kingdom’s Frontierland area.

This has led some fans to suggest that Disney World’s Country Bear Jamboree should also get a retheme to keep with the new spirit of the Frontierland section of Magic Kingdom Park. This attraction is considered by many to be somewhat outdated. But, to be fair, there are also those who absolutely love the Country Bears.

Now, one Disney World fan on Twitter has an idea that could help the animatronics from both Splash Mountain — Br’er Rabbit, Br’er Fox, Br’er Bear, and more — and Country Bear Jamboree live on at another area of Walt Disney World Resort property.

I think the environments of Splash Mountain/Bear Band [Country Bear Jamboree] would be neat for a hotel. You have swamps, caves, a riverboat, and cute little houses with a bunch of critters to populate this world of Technicolor.

I think the environments of Splash Mountain/Bear Band would be neat for a hotel. You have swamps, caves, a riverboat, and cute little houses with a bunch of critters to populate this world of Technicolor.

Related: Everything We Know About the New Jungle Cruise Retheme

While Disney has not, of course, confirmed any plans to either retheme Country Bear Jamboree at this time or reuse the existing animatronics from Splash Mountain, this idea is undeniably intriguing.

It would allow Disney Parks Guests who love the characters in these attractions to still enjoy them in a less highly-themed setting. Br’er Rabbit could, for example, simply be sitting on a log in a hotel lobby with his fishing pole — a subtle nod to the fan-favorite original Splash Mountain ride.

As a matter of fact, there is an existing hotel that could serve, perhaps, as inspiration for this idea. The Mariott Gaylord Opryland Hotel in Nashville, Tennessee has an atrium that feels quite similar to what Lynch described in his social media post.

Add a bit more Technicolor — and a LOT of Disney magic — and the concept of a Disney Resort that transports Guests to a whimsical, cartoon forest world could come to life.

Again, Disney has not announced any plans to alter Disney World’s Country Bear Jamboree anytime in the near future, and it is not yet known what will happen to Splash Mountain’s current audio-animatronic figures.

But, Walt Disney himself certainly believed in dreaming — and, someday, wouldn’t it be fun to walk through a magical Disney forest filled with woodland creatures.

It is worth noting that, should Disney decide to recycle the Splash Mountain animatronics following the ride’s retheme, it would actually be carrying on a long tradition! These Song of the South Audio Animatronics were originally part of the America Sings attraction, which operated at Disneyland Resort from 1974 to 1988.

Disney has also resued other animatronics in the past, including the popular Three Caballeros characters who currently appear in EPCOT’s Gran Fiesta Tour — they were originally part of Fantasyland’s Mickey Mouse Revue!

Furthermore, some of the Seven Dwarfs were recycled from Magic Kingdom’s now-defunct version of Snow White’s Scary Adventures and installed in the popular Seven Dwarfs Mine Train roller coaster.

Step inside the rustic theater known as Grizzly Hall and take your seat before the lights dim. Clap along as 18 Audio-Animatronics hillbilly bears play and sing during this 16-minute, foot-stompin’ cele-bear-tion. You’ll hear a medley of original and classic tunes—all performed by the zaniest critters in the woods.

What do you think? Would you like to see a new Walt Disney World Resort themed after a retro technicolor forest?