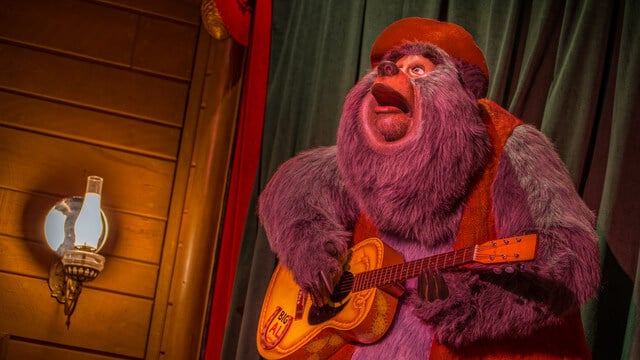 As The Walt Disney Company continues to celebrate and incorporate diversity into the parks and update rides that they deem outdated, will Country Bear Jamboree at Magic Kingdom be the next retheme at Walt Disney World?

We do want to make note that rumors have circulated about Country Bear Jamboree being replaced in the past, but Disney was quick to shut those down. However, with that being said, a lot has changed since then, and other attraction reimaginings have been announced.

Please keep in mind that this article is pure speculation and Disney has not announced a retheme for Country Bear Jamboree.

First, let’s start with why some feel that this attraction is outdated and is in need of a desperate retheme or, at the very least, some updates.

The song lyrics aren’t the only things to be considered outdated. There is also certain dialogue that the bears say that can be considered offensive to some as well as the animatronics being pretty old (and a bit creepy). So even if Disney does not retheme the entire show and turn it into a completely different attraction, at the very least they could update some of the audio-animatronics.

So why could Country Bear Jamboree be the next attraction to receive a major update? Well, The Walt Disney Company is continuing to make an effort to celebrate and incorporate diversity into the Disney Parks. We have seen this in action with the recent attraction updates and announcements, such as Redd the Pirate in Pirates of the Caribbean, the soon-to-be retheming of Splash Mountain into a Princess and the Frog attraction, and reimagined scenes in the classic attraction Jungle Cruise.

Therefore, as the company continues to make some changes — large or small — to Disney Parks attractions, Disney could end up deciding to make some updates to Country Bear Jamboree, either updating the attraction to make it more modern and family-friendly or retheming it entirely. Keep in mind, though, that this is just a prediction and hasn’t been announced.

Back in July 2020, a survey from Walt Disney World was making its rounds to Disney World Guests, and it included a variety of questions about the Country Bear Jamboree attraction. The questionnaire asked Guests if they thought or felt like the attraction was boring, exciting, inspirational, and more.

This could be an indication that Disney was trying to find out if Guests feel this attraction is offensive, outdated, and in need of an update, or if Guests love the attraction the way it is. Again, this survey was sent out last summer and there is still no word on if Disney is considering making changes to Country Bear Jamboree, but Inside the Magic will update you as we get information.

The Country Bear Jamboree attraction is located in Frontierland of Magic Kingdom in Walt Disney World. It’s been around for quite some time and some even consider it a classic Disney attraction.

The attraction was also located at Disneyland in California for quite some time, but it closed in 2001 as it was replaced with The Many Adventures of Winnie the Pooh.

Related: Did You Know Magic Kingdom Used to Have a ‘Bar’?

Do you think Country Bear Jamboree is outdated? Should Disney retheme this attraction next? Let us know in the comments below.