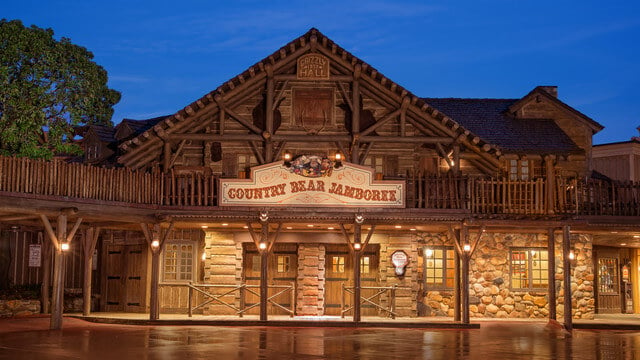 When the Magic Kingdom opened in October 1971, Grizzly Hall was already at home in Frontierland.  One of the last attractions that Walt Disney himself helped develop, it was not originally slated for Walt’s “Florida Project”.  Instead the concept was drawn up for a ski resort Disney hoped to build in Mineral King, California.  Concept art for a singing bear show was envisioned by Marc Davis and Al Bertino.  Walt’s approval of the concept was bittersweet as his delight in Davis’ drawings was the last time Walt and Marc spoke. Walt passed away a few days later.

After running through several musical styles and show concepts it was eventually decided that the show would center on country music.  X Atencio and George Bruns put together the musical numbers and the E-ticket attraction was born. An audio animatronic cast of 18 bears and one raccoon operate on five different stages which rotate, drop down from the ceiling or rise up from the floor.  Multiple back drops help change the scene for each of the bear performers.  In addition to the musical bears there are three other characters that appear as mounted wall trophies just off stage. The Country Bear Jamboree thrilled guests and was such a success that less than a year later the show was opened as the centerpiece to Bear Country (which eventually became Critter Country) at Disneyland in California.  The California edition was actually two theaters of the same show to increase capacity.  The show was also added to Tokyo Disneyland in 1983.   The attraction was sponsored by Pepsi/Frito Lay at the Magic Kingdom from 1971-1981; Wonderbread at Disneyland from 1975-1990 and House Foods at Tokyo Disneyland from 1983 (ongoing). The Country Bear Christmas Special was added as an overlay to the show in 1984 and ran until 2005 at the Magic Kingdom in Florida (the California show was removed in 2001 to make way for the Many Adventures of Winnie the Pooh).  This was the first time that the Walt Disney Company had a seasonally interchangeable attraction at its theme parks.  Yet another overlay was conceived in 1986: the Country Bear Vacation Hoedown.  This summer themed show ran until 1992 at Walt Disney World.  All three versions of the Country Bear Jamboree are still, to this day, changed out seasonally at Disneyland Tokyo.

The original (Walt Disney World) attraction was refurbished in 2012.  Roughly 5 minutes was shaved from show by removing some songs or shortening them and omitting some of the dialog.  The Country Bear Jamboree still performs at the Magic Kingdom at the Walt Disney World Resort in Lake Buena Vista Florida and at Tokyo Disneyland. Comments Off on 45 years of happy hoedown: The Country Bear Jamboree