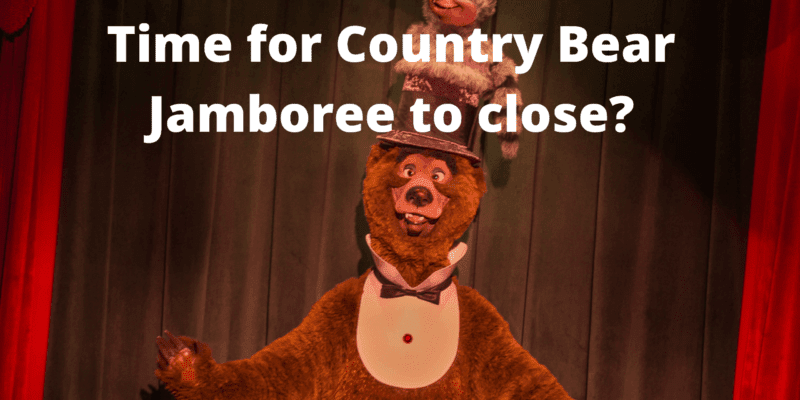 Here are a few reasons why I think the show at Frontierland in Walt Disney World needs to be replaced, as it was replaced at Disneyland.

The lyrics are no longer appropriate

It’s 2020 and some of the lyrics sung during the course of the show are incredibly inappropriate for kids. Remember that the Magic Kingdom is primarily a family theme park, and while I totally respect old Country songs, they have a time and place. Walt Disney World is not one of those places.

Don’t believe me? Here’s a couple of examples of lyrics you can still hear in the show today. The first talks about hitting and shooting someone:

The second mentions being turned-on:

Every time I meet a guy who gets me shook,
All I ever get from him’s a dirty look.
It’s the same way everywhere, I’ve found.
All the guys that turn me on turn me down.

All the guys that turn me on turn me down.
Nothing works for me that I’ve found.
It’s the same way everywhere, I see.
Nothing ever seems to work for me.

Lastly, the famous blood on the saddle reference from Big Al:

If the next item on my list wasn’t such a problem, I think more people would be in agreement with me.

Related: What is the magic age to take your kids to the Magic Kingdom?

The sound quality is terrible

When my wife and I last watched the show back in November of last year, we found that the majority of it was completely inaudible due to the outdated technology in the theater.

What’s the point in the show if you can’t hear many of the lines being said?

Before you ask, both of us are in our late 20s and have a very sound hearing!

The animatronics belong in a horror movie

While there was once a lot of love for Buff, Melvyn, Max, Gomer, Henry, Zeke, Oscar, Ernest, Zeb, Liver Lips, Wendell, Trixie and the rest of the cast, the animatronics are just not in a great place. The audio-animatronic work was fantastic at the time but in 2020, it just doesn’t hold up.

Even the “2012 reimagining” of the attraction didn’t do much to improve the animatronics.

I’ve got nothing against Disney reusing them elsewhere and have always thought a restaurant that houses some of the fantastic animatronics from past attractions would do incredibly well.

Only the die-hard fans enjoy it

There’s always laughter from guests watching the show, which is fantastic to see. The only thing is that it is coming from the same people who are mouthing every line of the show.

There’s nothing wrong with die-hard fans loving the show, but when it doesn’t excite new visitors to the park, you’ve got a problem.

I could have written a piece on just how bad the Country Bears movie is, but I think everyone is in agreement that the movie was awful!

With Disney squashing rumors of closure last year, despite my thoughts, I think the bears will be around for a while yet.

Do you think I have a point on the Country Bear Jamboree or do you think it should stay at the Magic Kingdom forever? Let me know in the comments below — and please be kind, this is just my opinion!