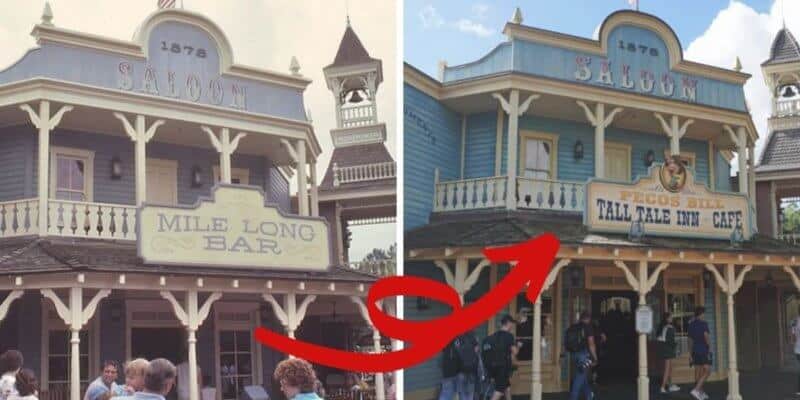 The Disney Parks are a perfect example of this Walt Disney quote — They are always changing and adapting as the parks keep moving forward, leading Guests down new paths and into new experiences.

One thing that has changed over at Magic Kingdom is the fact that there used to be a “bar” called The Mile Long Bar inside Frontierland — Both at Disney World and Disneyland!

It was located near the Country Bear Jamboree at Walt Disney World Resort and in Bear Country in Disneyland. It sold things like snacks and comfort food along with non-alcoholic beverages. But when Disney World decided to close down the Mile Long Bar, they kept a tribute to the popular spot inside the queue line to Frontierland’s popular attraction — Big Thunder Mountain.

Now, the location is occupied by the popular quick service location, Peco’s Bill Tall Tale Inn Cafe in Disney World and over in Disneyland, the spot is now known as Pooh’s Corner.

Mile Long Bar Opened in Frontierland in Magic Kingdom Park at Walt Disney World on October 1, 1971, and closed on January 5, 1998. An ingenious use of mirrors made the bar seem like it was a mile long. Served light fare and cool drinks. Also in Bear Country at Disneyland, opened in 1972. Later named Brer Bar (1989-2002). Also in Westernland at Tokyo Disneyland, opened on April 15, 1983.

One Disney Forums user even took to the platform to share an amazing blueprint of the bar. They write:

Found this one of a Sketch/Blueprint of Mile Long Bar that is in the book “A Brush With Disney: An Artists Journey”

And thanks to YouTube, we have a video discussing the old Mile Long Bar at Disneyland! Check it out:

Did you know about the Mile Long Bar located at Disney World and Disneyland? Are you sad they closed it down? Let us know your thoughts in the comments below.