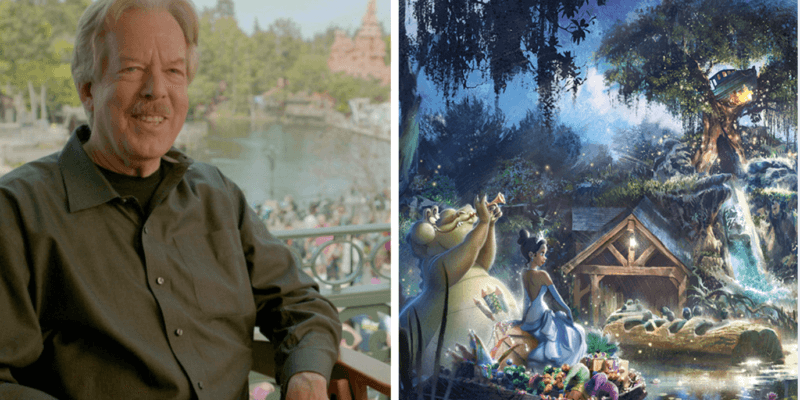 Amid today’s news that the classic Disney Parks ride Splash Mountain will be completely reimagined with a Princess and the Frog theme, fans are experiencing mixed reactions to the announcement.

One bright spot for all Disney park lovers, however, is that Tony Baxter will return to Splash Mountain for the redesign of the famous attraction. Baxter designed the original Splash Mountain using characters from 1940’s Walt Disney Studios film Song of the South.

For the upcoming Splash Mountain redesign, former Imagineer and Disney Legend Baxter will serve as a Creative Adviser to Imagineers. The project is being led by Senior Creative Producer Charita Carter.

Baxter, who received the Disney Lifetime Achievement Award in 2013, knows Splash Mountain inside and out (literally) and is a former Senior Vice President of Creative Development at Walt Disney Imagineering.

In a statement today in the OC Register, Baxter said, “The attraction will be one to be proud of. I look forward to being a part of a new adventure in Disney magic and fun.”

Baxter isn’t the only member of the Disney family who is excited about the re-theming of Splash Mountain at both Disneyland Park in Anaheim, California and Magic Kingdom Park at Walt Disney World in Orlando, Florida.

Anika Noni Rose, who voiced Princess Tiana in the animated Princess and the Frog film, said, “It is really exciting to know that Princess Tiana’s presence in both Disneyland and Magic Kingdom will finally be fully realized! As passionate as I am about what we created, I know the fans are going to be over the moon. The Imagineers are giving us the Princess and the Frog Mardi Gras celebration we’ve been waiting for, and I’m here for it!”

We look forward to seeing what the legendary Imagineer Tim Baxter and the rest of the Disney Imagineering team behind the brand new Splash Mountain have in-store for us! There is currently no known timeline for the project.

What do you think about Tony Baxter and the Splash Mountain redesign? We are thrilled that the Disney Imagineering icon is involved!