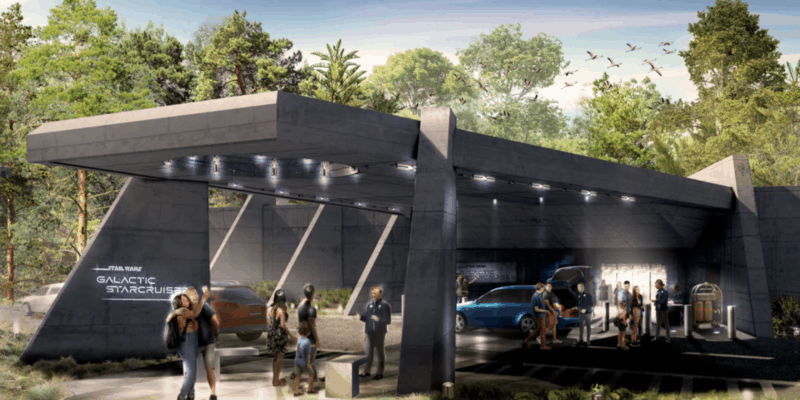 Ever since the Star Wars: Galactic Starcruiser hotel was first announced over four years ago at the 2017 D23 Expo, Star Wars fans weren’t sure what to expect — after all, Disney had never before undertaken such an ambitiously immersive endeavor, and Star Wars: Galaxy’s Edge hadn’t yet opened at Walt Disney World Resort’s Hollywood Studios Park or Disneyland Resort’s Disneyland Park, so there was nothing to compare the project to at the time.

As Walt Disney World has given would-be Guests more and more glimpses of the Halcyon luxury starliner, it has become clear that this is an experience that will truly — well, at least as closely as possible without actually leaving Earth — transport passengers to a galaxy far, far away.

From “a detour or two” to iconic Star Wars planets like Tatooine to a port excursion to Batuu’s Black Spire Outpost — and guaranteed rides on both Star Wars: Rise of the Resistance and Millennium Falcon: Smugglers Run — the Starcruiser involves a more in-depth story than Walt Disney Imagineering has ever attempted before.

And, now, it seems that construction on the Chandrila Star Line’s Corellian MPO-1400 Star Cruiser is nearing completion. Disney recently filed a permit for the “removal of site trailers (2) and associated utilities removal”, indicating that the exterior construction on the Starcruiser site is finished, or nearly finished.

Related: Disney’s NEW ‘Star Wars’ Experience Is “Like Four Movie Theaters Next to Each Other”

This is supported by a recent photo shared by Twitter user, Bioreconstruct:

Aerial look at Star Wars Galactic Starcruiser hotel. Trees on a berm and the front walls hide view of the show buildings. Upon check in guests travel quickly up to the Halcyon for 2 days of adventure in a pretend cruise in space.

Aerial look at Star Wars Galactic Starcruiser hotel. Trees on a berm and the front walls hide view of the show buildings. Upon check in guests travel quickly up to the Halcyon for 2 days of adventure in a pretend cruise in space. pic.twitter.com/KnpyFRvN8J

In the image, it is clear that the “spaceship” is almost done — if not entirely done — on the outside.

As for the interior of the ship, which will feature a number of spaces like the Bridge, the Engine Room, the Atrium, the Crown of Corellia Dining Room, and the Sublight Lounge, we’ve already been given a look at a nearly completed stateroom, indicating that the starship’s indoor areas are well on their way to completion, as well.

The interior of the Star Wars hotel is sure to be something for fans to behold, embodying all the best over-the-top elements of set design from Star Wars movies.

The Art of Star Wars: Galaxy’s Edge coffee table book shared details about the design of the Starcruiser:

Are you looking forward to staying on the Galactic Starcruiser? Visit the official webpage for all of the latest details, including an alert when reservations officially open ahead of the Disney Resort’s spring 2022 opening.