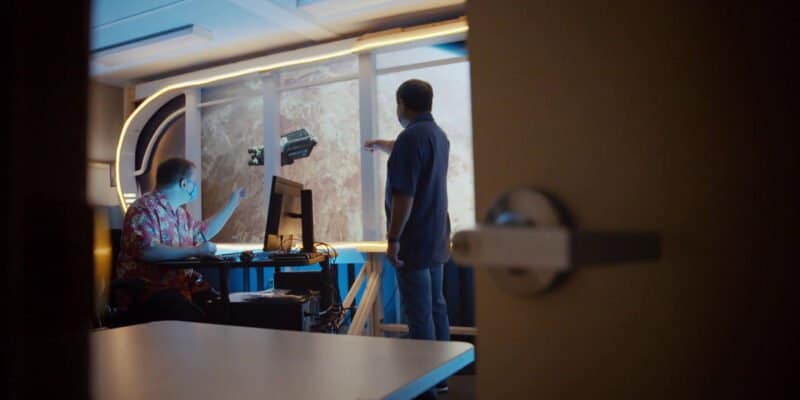 When The Walt Disney Company officially unveiled its newest Disney Cruise Line ship — the Triton Class Disney Wish — earlier this year, fans were elated with the many exciting spaces they will get to experience while onboard.

Now, Walt Disney Imagineering is pulling back the curtain on its brand new Star Wars experience, which marks the first time ever the company has created a Star Wars-themed space primarily for adults.

Although the Star Wars Hyperspace Lounge will be all-ages during the day and will feature plenty of non-alcoholic beverages for Guests of all ages, it was designed with grown-ups in mind.

The Orlando Sentinel recently spoke to some of the Imagineers behind Disney’s newest space inspired by a galaxy far, far away:

“We’ve heard from adults, why are Star Wars experiences limited to the kids spaces,” said Imagineer and project coordinator Sachi Handke, noting they would hear things like, “My kids are Star Wars fans because I am a Star Wars fan and I’ve imbued them with that fandom.”

The newspaper’s article went on to note:

The space is meant to feel lavish, pulling inspiration from the ship of character Dryden Vos seen in “Solo: A Star Wars Story” or the casino city Canto Bight seen in “Star Wars Episode VIII: The Last Jedi.”

What’s in the works is a high-end bar as if travelers were on a yacht-class spaceship. For those that venture into the space, it will be as if they’re leaving the Disney cruise ship and boarding a vessel in that galaxy far, far away. That includes a promised sliding door with a signature, “whooosh” sound.

Intriguingly, it seems like the Imagineering department is trying to create a space extremely similar to the upcoming Star Wars: Galactic Starcruiser hotel, an immersive experience set to open at Walt Disney World Resort in spring 2022.

The sleek new lounge will also feature some high-tech engineering in order to bring the Star Wars universe to life for Guests. The Sentinel shared:

Once inside, every hour or so, a massive screen with 16,000 pixels will be displaying scenes moving among six planets from the Star Wars galaxy, running from 7-10 minutes each. They include Tatooine, Mustafar, Batuu, Coruscant, the Moons of Endor and a scene including the Ace Squadron, which are characters from a Disney cartoon called “Star Wars Resistance.”

“It’s like four movie theaters next to each other,” said concept designer Nick Snyder. “That’s the kind of resolution we’re talking about here.”

StarWars.com previously shared all 40 starships that Guests can expect to see when they enter the Star Wars Hyperspace Lounge:

Are you excited about Disney’s newest Star Wars experience?