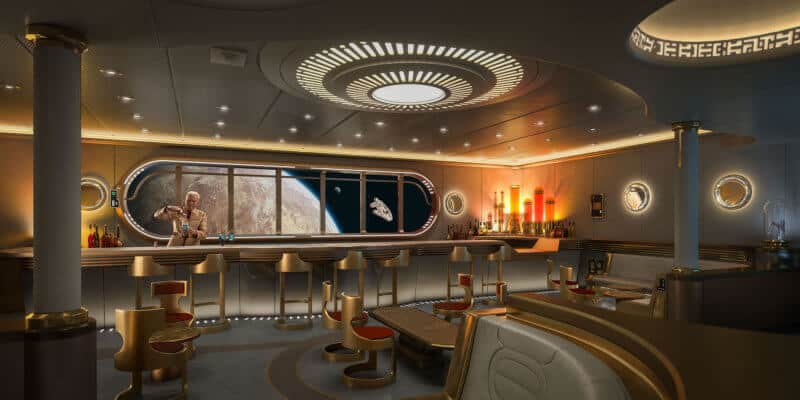 Disney Cruise Line fans have been anxiously awaiting any and all details about the upcoming Triton Class ship, the Disney Wish. Now, Disney has provided fans with a virtual first look at many of the incredible spaces coming to the new vessel, including the Star Wars Hyperspace Lounge.

Related: All Aboard! Minnie to Be the Captain on the Disney Wish

During today’s virtual tour, Imagineer Pam Rawlins shared details about this out-of-this-world experience for adults only. She said:

“We wanted to curate an exceptional collection of experiences for adults with a uniquely Disney twist…Star Wars fans, this is the place you’ve been looking for. Get ready to planet hop through the galaxy at Star Wars Hyperspace Lounge. When you enter this first-of-a-kind lounge, you will board a luxury spaceship, where you will sip otherworldly concoctions and enjoy galaxy-wide panoramic views of the worlds of Tatooine, Mustafar, Batuu, and more!”

Although we’ve only gotten a brief glimpse at this experience, it promises to be absolutely incredible. In the concept art [above], it’s easy to see how the sleek look of the upcoming Star Wars: Galactic Starcruiser hotel will translate to this new Star Wars experience.

The Starcruiser is set to have a Star Wars-themed dinner show experience that looks, aesthetically, similar to this new bar.

The bar is officially described by Disney as, “a high-end bar styled as a luxurious, yacht-class spaceship that will take guests on a first-of-its-kind tour of a galaxy far, far away. ”

Related: The Cantina Wars: Is a Second Establishment Coming to Rival Oga‘s at Disneyland?

There is also no word on the specifics of the menu at this time, but it’s possible that beverages inspired by Oga’s Cantina at Star Wars: Galaxy’s Edge could be featured — particularly since we know Guests will get a faraway look at Batuu!

If you are interested in setting sail on the incredible Disney Wish cruise ship in Summer 2022, stateroom reservations open on May 27, 2021. The newest Disney Cruise Line ship will be based at Port Canaveral and will travel to Disney’s private island, Castaway Cay, in the Bahamas for its inaugural season.

Are you looking forward to the Disney Wish’s new Star Wars bar?