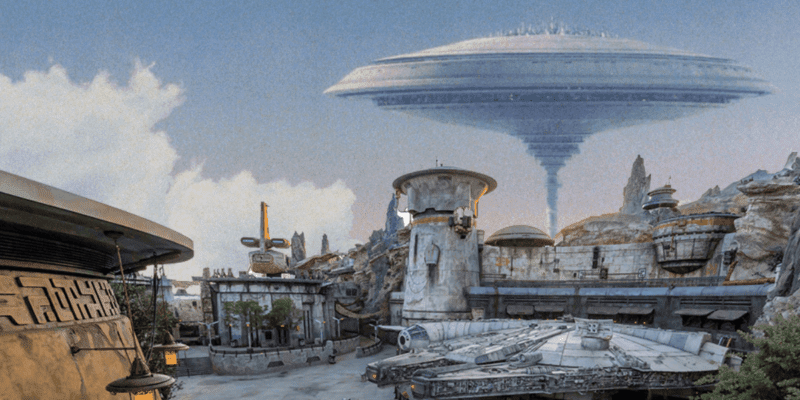 With all of the recent talk about The Walt Disney Company’s proposed DisneylandForward expansion at Disneyland Resort in Anaheim, California, the idea of other changes that could come to Disney Parks has been on fans’ minds.

Prior to the DisneylandForward announcement, Star Wars: Galaxy’s Edge was arguably the most exciting Disney theme park expansion of all time. The 14-acre Star Wars-themed expansion came to both Disney’s Hollywood Studios at Walt Disney World Resort in Orlando, Florida, and Disneyland Park at Disneyland Resort.

When the two Star Wars lands opened — on May 31, 2019, at Disneyland and on August 29, 2019, at Disney World  — Star Wars fans could literally step into a galaxy far, far away for the very first time. The experience? Nothing short of incredible.

Although Batuu has yet to actually appear in a Star Wars movie or series, it is mentioned in Solo: A Star Wars Story (2018), when droid L3-37 told Lando Calrissian (Donald Glover) that without her help, he wouldn’t make it from “here [Vandor] to Black Spire”.

Galaxy’s Edge should expand straight up.

Ironically, this reference brings us directly to our point.

Disney has been vocal about wanting to increase the presence of the Star Wars franchise in their theme parks — they even recently opened the new Star Wars Trading Post at Disneyland Resort’s Downtown Disney District — and, in regard to expanding Galaxy’s Edge, Han Solo’s favorite frenemy just might be the man for the job.

Lando Calrissian is the man who runs things in tibanna gas mining colony, Cloud City, high above the gas planet Bespin . When fans first met him — then played by Billy Dee Williams, in Star Wars: Episode V – The Empire Strikes Back (1980) —  the former smuggler and former owner of Han and Chewbacca’s Millennium Falcon was the Baron Administrator of Cloud City during the Galactic Civil War.

Imagine, if you will, being able to visit Cloud City straight from Batuu. Imagineers have certainly done tougher things — just look at the science behind the Twilight Zone Tower of Terror.

Expanding up and creating Cloud City on a platform above the existing Star Wars: Galaxy’s Edge land would solve a lot of real estate problems for Disney.

At Disneyland, there is simply no more room to expand the Star Wars land — DisneylandForward is going to be challenging enough in the years to come, and Galaxy’s Edge literally backs up to one of the roads into the theme park property.

Over at Disney World, Walt made sure to purchase plenty of land in Central Florida, but the placement of the new Star Wars: Galactic Starcruiser hotel is going to make it challenging to expand Galaxy’s Edge out. Therefore, building up into the sky still makes more sense.

Plus, just imagine, for a moment, going from the grittiness of Black Spire to the clean minimalism of Cloud City. And, including Bespin in a future iteration of Galaxy’s Edge would appeal to Star Wars original trilogy fans in a way that the current Star Wars land doesn’t.

What could Disney offer in a Galaxy’s Edge Cloud City expansion?

There are also plenty of activities Disney could offer to Guests who decided to visit Cloud City, straight from Star Wars canon:

Popular tourist activities included gambling, hiring a cloud car for sightseeing the city and occasionally touring the local mining operations. The high-end accommodations were exclusive, with luxury resorts often charging as much as 5,000 Imperial credits a night.

Can you imagine a cloud car attraction, perhaps similar to the immensely popular Flight of Passage or a high-end Star Wars hotel hovering in the air?

Yet, there is still a sense of continuity between the two planets. From a purely logistical standpoint, both Batuu and Bespin can be found in the Outer Rim.

And, from a timeline standpoint, Williams reprised his role as a much older, but no less suave, Calrissian in the final installment of the Skywalker Saga, Star Wars: Episode IX – The Rise of Skywalker (2019).

This is important because it means Calrissian is still alive during Batuu’s current point in the Star Wars timeline. Galaxy’s Edge is set between Star Wars: Episode VIII – The Last Jedi (2017) and Rise of Skywalker, when the First Order is still firmly in power.

Disney’s Imagineering department could undoubtedly create a backstory linking Batuu and Bespin, giving Guests an even more immersive experience than they already are. Not to mention the fact that the possibility of running into Lando Calrissian at a Sabacc table is enough to motivate any Star Wars fan to visit Galaxy’s Edge more often.

What do you think? Would you like to visit Cloud City at a Disney theme park?