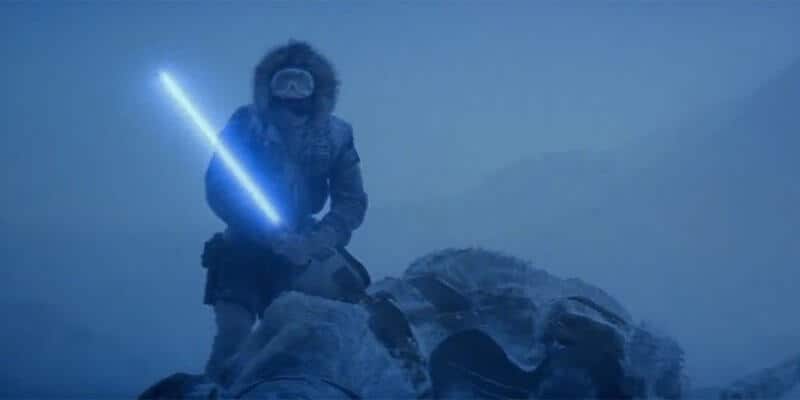 Star Wars has seen some epic lightsaber duels over its 40+ years as a franchise. It all started with Darth Vader (David Prowse/James Earl Jones) and Obi-Wan Kenobi’s (Alec Guinness) famous fight in Star Wars: Episode IV – A New Hope (1977).

This was, of course, followed by Luke Skywalker (Mark Hamill) and Vader’s iconic battle in Star Wars: Episode V – The Empire Strikes Back (1980).

It’s safe to say that lightsaber combat will probably always play a crucial role in the Star Wars universe.

Most recently, Lucasfilm President Kathleen Kennedy promised Star Wars fans the “rematch of the century” in the upcoming show, OBI-WAN KENOBI: An Original Series, on Disney+. As we patiently — or not so patiently — await the return of Ewan McGregor as Jedi Master Kenobi and Hayden Christensen as Sith Lord Vader/Anakin Skywalker, some fans have taken matters into their own hands.

TikTok user Anghelie Elizabeth captured a Colorado lightsaber duel that looks like it could be taking place on Hoth. This is (literally) one of the coolest Star Wars fan lightsaber fights you’ll ever see. The video is going viral, with upwards of 120,000 shares so far.

The duo appears to be battling in blizzard-like conditions and we can’t help put applaud their commitment to honing their skills in weather that would make a tauntaun shiver.

Only in Colorado can I stand on my balcony and see two men fighting with lightsabers, in 30° degree weather while it's snowing outside. ❤❄For licensing and usage, contact: licensing@viralhog.com

Make Your Own Star Wars Lightsaber

If you’ve ever wanted to create a lightsaber of your very own, Disney has made it easier than ever. When the Star Wars: Galaxy’s Edge expansions opened at both Disney World’s Disney’s Hollywood Studios Park and Disneyland’s Disneyland Park, they included an establishment called Savi’s Workshop — Handbuilt Lightsabers.

This amazing space allows fans of a galaxy far, far away to construct a lightsaber from scratch! The official description of the experience reads:

Meet one of Savi’s Gatherers outside his workshop, where you’ll choose one of 4 available hilt themes and receive a cloisonné pin to identify your selection. Themes include:

The Gatherers will now help you select the heart of your lightsaber—the kyber crystal, which is available in red, blue, green or violet.

Next, begin assembling your hilt—parts will be provided based on your theme and cloisonné pin. Each box of parts includes:

Upon hilt completion, the unused parts will be collected by the Gatherers and returned to Savi’s inventory. These are not included with your lightsaber package.

Finally, the Gatherers will masterfully connect your hilt to a 31” lightsaber blade so you’re ready for anything the galaxy puts in your path!

Other characters who have been included in this lightsaber series include Rey,  Kylo Ren and Ahsoka Tano, the Star Wars: The Clone Wars fan-favorite who recently made her live-action debut in The Mandalorian.

What do you think about these Star Wars fans battling in the snow? Has it inspired you to make a lightsaber next time you visit Disney’s Star Wars land?