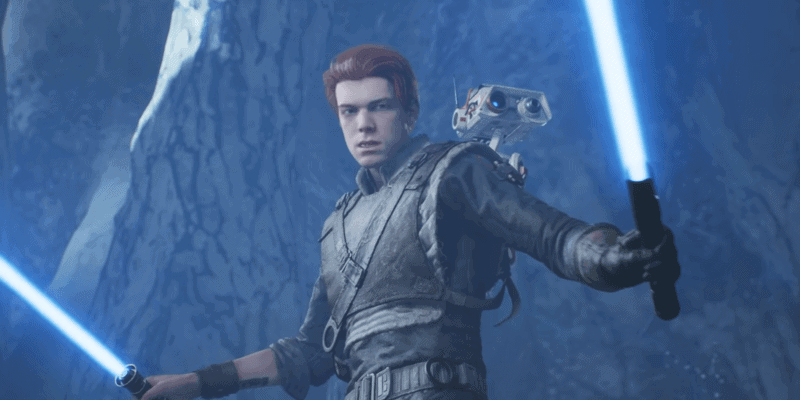 According to a CM, the color of the blade will be blue. There will also be an adapter to it so it looks like Cal’s Master’s (Jaro Tapal) double blade lightsaber.

According to a CM, the color of the blade will be blue. There will also be an adapter to it so it looks like Cal's Master's (Jaro Tapal) doubled blade lightsaber.

We wouldn’t be surprised if this new lightsaber showed up at the Star Wars Trading Post, which is moving to a new location at the Downtown Disney District at Disneyland Resort! We’ll report back when we have more information.

For those unfamiliar with Kestis, Wookieepedia has shared the following biographical information

Cal Kestis was a Force-sensitive human male who became a Jedi Knight during the reign of the Galactic Empire. As one of the few Jedi who survived the purge that destroyed the Jedi Order, Kestis lived in seclusion for years until a confrontation with the Inquisitorius compelled him to openly resist the Empire’s rule. Hunted across the galaxy by the Empire’s Jedi hunters, Kestis embraced his connection to the Force once more, having decided to restore the Jedi Order.

As the Padawan of Jedi Master Jaro Tapal, Kestis served alongside his mentor in the Clone Wars until the Grand Army of the Republic betrayed its Jedi officers, after receiving the command to execute Order 66 from Supreme Chancellor Sheev Palpatine.

Many fans of Star Wars Jedi: Fallen Order have wanted to see Kestis appear in a live-action Star Wars series for quite some time. Many have even noted that Cameron Monaghan, who portrays Kestis in the game, bears a striking resemblance to him in real life.

Although there’s certainly no guarantee, it’s possible that Disney and Lucasfilm officials will take the fact that he won the legacy lightsaber contest into consideration moving forward. Before The Mandalorian Season 2 finale episode aired, some expected Kestis to show-up to rescue Grogu — in reality, one of Star Wars’ most iconic Jedi Knights, Luke Skywalker, had that honor.

Now, some think Kestis could play a role in the upcoming OBI-WAN KENOBI: An Original Series, set to feature Ewan McGregor as Obi-Wan Kenobi and Hayden Christensen as Darth Vader. Nothing, however, has been confirmed about even the vague potential for Kestis to appear.

There are potential upcoming Star Wars projects, like the rumored Order 66 film, that Kestis could fit into from a Star Wars timeline standpoint.

Are you going to buy this new legacy lightsaber next time you visit Walt Disney World Resort? Stay tuned for the official release date of Cal’s lightsaber and click here to book a trip!

Comments Off on Cal Kestis Wins Legacy Lightsaber Reveal – Could He Appear In an Upcoming Show?