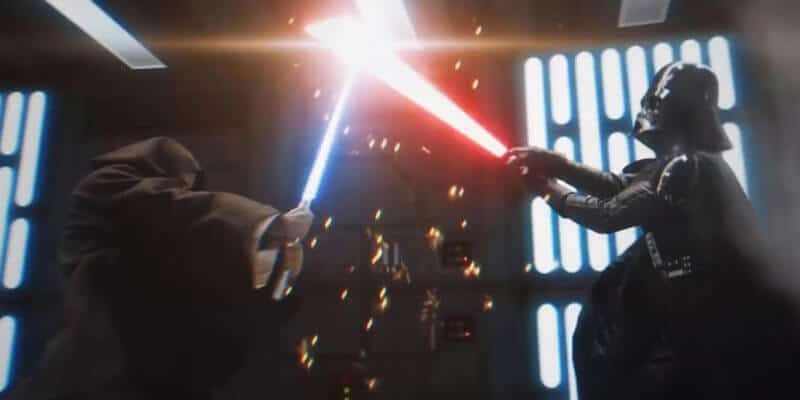 Retrospectively, the prequels have grown on many in the Star Wars fan community — and they certainly aren’t as divisive as the 2015 through 2019 Star Wars sequel trilogy ended up being. Now, Obi-Wan Kenobi fans, in particular, have something exciting to look forward to.

It had already been confirmed that McGregor would be reprising his role as Anakin Skywalker’s Jedi Master in an upcoming limited series directed by The Mandalorian’s Deborah Chow. At The Walt Disney Company’s 2020 Investor Day event on December 10, however, Lucasfilm President Kathleen Kennedy also confirmed reports that actor Hayden Christensen would be returning as Anakin Skywalker/Darth Vader.

The Obi-Wan series is set to take place approximately 10 years after the events of Revenge of the Sith, so any scenes of Anakin will have to be flashbacks. However, Kennedy also promised fans the “rematch of the century” between the iconic Dark Lord and the Jedi.

In doing this, Kennedy also essentially promised fans that the upcoming Star Wars streaming show will have to take place off of Tatooine, at least at some point — in the existing Star Wars canon, there is no known instance of Obi-Wan Kenobi leaving the desert planet and its twin suns during his exile.

In fact, when we meet old Obi-Wan Ben Kenobi (Alec Guinness) as he mentors Luke Skywalker (Mark Hamill) in Star Wars: Episode IV – A New Hope (1977), it seems as if he has been on Tatooine, well, forever.

However, as ScreenRant pointed out, it simply doesn’t make sense for the Kenobi show to have this single setting:

That particular piece of information seems to guarantee Kenobi’s temporary departure from Tatooine, as a confrontation with Vader on his home planet would make no sense. Obi-Wan wouldn’t be able to keep hiding there if Darth Vader knew where he was, and a discovery of his exile location would also put Luke in grave danger.

Their article continued with this possible reason for Kenobi’s departure from the iconic Star Wars planet:

One possible explanation is that Vader is the reason Obi-Wan leaves Tatooine. At the end of Revenge of the Sith, he believes Anakin Skywalker is dead – burned to ashes on some hellish hillside on Mustafar. Eventually though, he must learn of his former friend’s survival. Vader was kept in the shadows of the Emperor’s regime, mainly employed as an enforcer and hunter of Jedi. Few knew him, and even fewer were aware of his old identity.

It’s also possible, of course, that Ewan McGregor’s Obi-Wan has to depart from the relative safety of the circumbinary planet to complete a mission — Bail Organa’s Rebel Alliance is just coming into existence during this era of the newly revamped Star Wars timeline — or to provide aid to fellow Jedi, such as Grand Master Yoda, who survived the execution of Emperor Palpatine’s Order 66.

We will, of course, have to wait until OBI-WAN KENOBI: An Original Series airs to find out for sure what causes Kenobi to leave Tatooine and, ultimately, engage in what is sure to be an epic lightsaber battle with Darth Vader.

For now, we know little about casting except that Christensen and McGregor will be returning. Live-action Aladdin (2019) actress Naomi Scott has been linked to a leading female role. OBI-WAN KENOBI: An Original Series does not appear on Disney’s 2021 release schedule and an official release date has yet to be announced.

At this time, the only two Star Wars shows confirmed for Disney+ this year are Mandalorian spinoff The Book of Boba Fett and animated series Star Wars: The Bad Batch.

What do you think will cause Obi-Wan Kenobi to depart from Tatooine — and young Luke Skywalker? Which planet do you think Kenobi and Vader’s showdown will take place on?