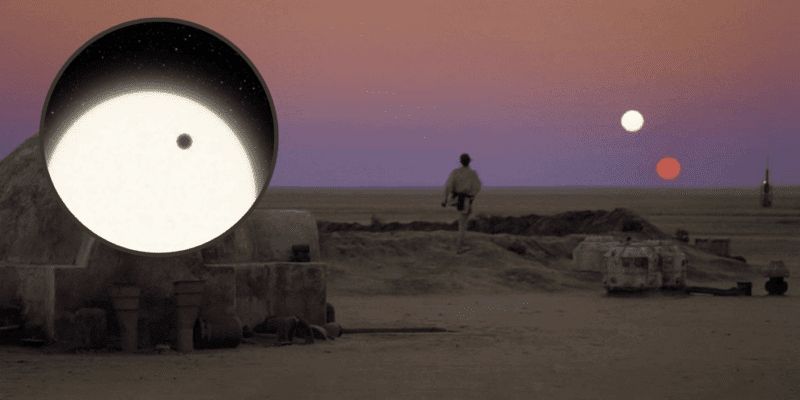 There’s a lot we don’t know about space. From unexplored galaxies to strange phenomenons to the fact that the Millennium Falcon — with Han Solo and Chewbacca in the cockpit — could theoretically be flying around somewhere, we just can’t be sure what is happening in our own galaxy, let alone in galaxies far, far away.

Just yesterday, we reported on a nebula that has been named after Star Wars’ cutest character, The Mandalorian’s Grogu (AKA Baby Yoda AKA The Child).

Now, it seems that NASA has done one better and discovered a real-life planet that shares a strange feature with the iconic Star Wars planet Tatooine — multiple suns! Tatooine’s double suns have become iconic within the Star Wars universe, but actual planet KOI-5Ab has three suns.

CBS-owned ComicBook.com shared these details about KOI-5Ab (pictured above), which was first discovered during NASA’s Kepler mission, which ran from 2009 – 2018, and has now garnered renewed interest thanks, in large part, to its trio of suns:

The planet is most likely a gas giant planet similar to Jupiter or Saturn given its size and it orbits in a star system with two other companion stars with the planet itself moving on a plane out of alignment with at least one of the stars — something that makes an already rare planet even more unusual.

“We don’t know of many planets that exist in triple-star systems, and this one is extra special because its orbit is skewed,” said Ciardi. “We still have a lot of questions about how and when planets can form in multiple-star systems and how their properties compare to planets in single-star systems. By studying this system in greater detail, perhaps we can gain insight into how the universe makes planets.”

As we continue learning more and more about space through initiatives like the Kepler mission, who knows what other Star Wars-like planets are out there? (Please tell me there’s actually a Forest Moon inhabited by Ewoks.)

When will Tatooine be back in the Star Wars franchise?

Tatooine was the very first planet Star Wars viewers saw in the first Skywalker Saga film, Star Wars: A New Hope (1977), long before most moviegoers even knew they were Star Wars fans and decades before A New Hope got its Episode IV designation.

Due to this — and the fact that it’s the homeworld of Anakin Skywalker/Darth Vader (Hayden Christensen in the prequel trilogy and the upcoming OBI-WAN KENOBI: An Original Series) and Luke Skywalker (Mark Hamill) — Tatooine has long remained one of the most famous planets in the Star Wars story.

Its twin suns immediately — and forever — etched in the Star Wars legacy, we haven’t left the circumbinary planet behind yet.

Most recently, Tatooine has been featured in both seasons of showrunner Jon Favreau and executive producer Dave Filoni’s hit series, The Mandalorian. Bounty hunter Din Djarin (Pedro Pascal) and little Grogu haven’t been able to say away from the desert planet any more than the rest of us — and they’ve been joined by some great new characters, including Mos Pelgo Marshal Cobb Vanth (Timothy Olyphant) and Peli Motto (Amy Sedaris).

Now, whether or not The Mandalorian Season 3 heads back to Tatooine, we know that the upcoming spinoff series, The Book of Boba Fett will return to the familiar planet.

When the series premiers in December 2021, we may finally get to learn how Fett escaped from the Sarlacc pit and, if we’re lucky, maybe we’ll get a CGI cameo of Harrison Ford as Han Solo in the Mos Eisley cantina.

Plus, who knows, Favreau and Filoni just might throw in a Tosche Station reference or let us watch another Krayt dragon situation gone awry.

What do you think about this real-life planet that has multiple suns like Tatooine? Does it make you want to visit Star Wars: Galaxy’s Edge and take your own trip to the Outer Rim soon?

Comments Off on Scientists Discover Real Planet That Resembles Tatooine