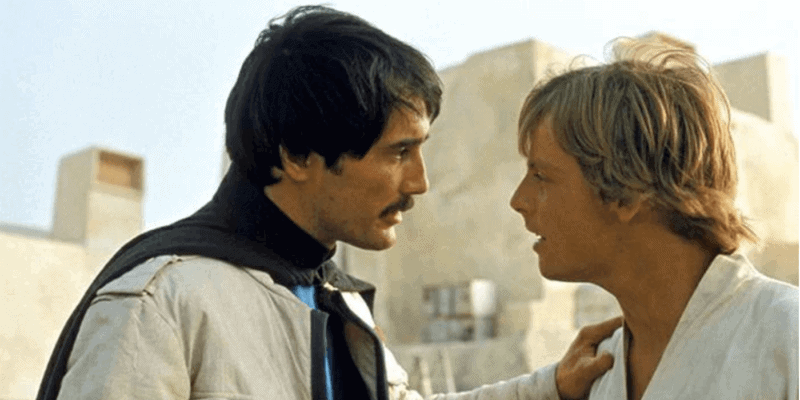 If you’ve ever seen Star Wars: Episode IV – A New Hope (1977), you probably recall Luke Skywalker (Mark Hamill) telling his uncle, Owen Lars, “But I was going into Tosche Station to pick up some power converters!”

The seemingly throwaway line has become the subject of numerous Star Wars memes and jokes through the years. Always ready to embrace the fandom — and always active on social media — Hamill himself (pun intended) has gotten in on the fun this evening.

He posted the following photo, complete with a power converter, to his Twitter account, with the caption:

I can finally cross this off my “to-do” list.

I can finally cross this off my "to-do" list.#BetterLateThanNever pic.twitter.com/3rmfEiA3tv

For those unfamiliar with Tosche Station’s history, Wookieepedia provides this description, including details of a deleted scene from George Lucas’s original trilogy:

Tosche Station was a power station and repair shop on the outskirts of Anchorhead on the desertworld of Tatooine, owned by Merl Tosche and operated by Laze Loneozner. During the time of the Galactic Civil War, Loneozner was friends with Luke Skywalker and Biggs Darklighter, who, prior to becoming a member of the Rebel Alliance, spent time at the station with Lonezner, his girlfriend Camie Marstrap, and other youth from Anchorhead. After witnessing a battle between the Rebel Alliance and the Galactic Empire in the skies over Tatooine, Skywalker told his friends about what he had seen, but they did not believe it had been a battle. It was at Tosche Station that Darklighter informed Skywalker that he was defecting from the Empire to join the Rebel Alliance.

Last year, the actor spoke to StarWars.com about the power converter line, noting how Luke’s whining has become a hallmark of the scene:

“You know, I get mocked a lot for, ‘But I was going to Tosche Station to pick up some power converters. But I did that intentionally to be able to grow and make him as much of a clueless teenager as possible, because by the end of the film he has found his purpose in life and he’s so profoundly changed.”

Hamill also shared that he “tried to emphasize [Luke’s] immaturity” to create a major contrast between the boy fans saw in the first Star Wars movie and the character he became by the time the Empire was defeated and the Death Star was destroyed in Star Wars: Episode VI – The Return of the Jedi (1983).

Although it took Hamill 43 years to finally obtain his power converters, we’re certainly glad to see that chore is finally complete. Nothing like procrastination — and a bit of saving the galaxy — in the meantime.

What’s next for Mark Hamill?

Hamill, most recently, reprised his role as Luke Skywalker (at his current age) in the Star Wars sequel trilogy, alongside his original trilogy co-stars Harrison Ford (Han Solo) and Carrie Fisher (Princess General Leia Organa), until her untimely passing in 2016.

The Skywalker Saga officially came to an end with Star Wars: Episode IX – The Rise of Skywalker (2019).

The actor hasn’t yet left the Star Wars saga, however, also providing voice work for a CGI de-aged version of Skywalker — who appeared much like Hamill did during the Star Wars: The Return of the Jedi (1983) era — in the December 18 Season 2 finale of The Mandalorian on Disney+.

Related: Poe Dameron Was Hiding in Season 2 of ‘The Mandalorian‘

Hamill has previously indicated he would be willing to pass the lightsaber at this point and may no longer appear as Skywalker in future Star Wars projects. Many rumors indicate that Sebastian Stan — known for playing Bucky Barnes/Winter Solider in the Marvel Cinematic Universe — could be cast as the iconic Jedi Master moving forward.

Only time will tell and, currently, nothing about Luke Skywalker’s return to The Mandalorian Season 3 or a spinoff series has been confirmed by Mandalorian showrunner Jon Favreau or other Lucasfilm executives.

Are you glad Hamill finally got his power converters after four decades? Would you like to see the actor appear in future episodes of The Mandalorian or new Star Wars movies moving forward?