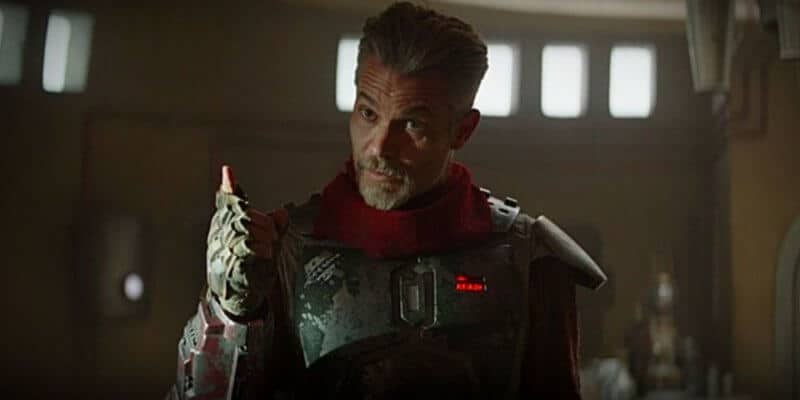 During the year between The Mandalorian Season 1 finale (Taika Waititi’s “Chapter 8: Redemption”) — in which viewers saw Moff Gideon (Giancarlo Esposito) wield the Darksaber for the first time — and The Mandalorian Season 2 debut (“Chapter 9: The Marshal”), rumors about casting, locations, and just about everything else Mandalorian-related abounded online.

One of the very first confirmed reports about The Mandalorian Season 2 was that Timothy Olyphant (Deadwood, Justified, The Santa Clarita Diet) would be making an appearance in the hit Jon Favreau and Dave Filoni Star Wars series.

In mid-May, at the time of the announcement, we knew little about the role Olyphant would be playing. As it turned out, he entered The Mandalorian with a bang — and a suit of very familiar beskar armor — in Season 2, Episode 1 (“Chapter 9: The Marshal”).

Olyphant portrayed Mos Pelgo Marshal Cobb Vanth on Tatooine — and he did so with aplomb. The actor’s previous experience with Western series was evident as he seamlessly navigated Mandalorian creator Favreau’s space Western, which has its roots deeply entrenched in the Spaghetti Westerns of the 1960s.

Vanth and title character Din Djarin (Pedro Pascal) got off to a bit of a rocky start at the Mos Pelgo cantina, but eventually came to an agreement in which Djarin could earn back the Marshal’s Mandalorian armor — obtained, we discover, from Jawas and, obvious to any Star Wars original trilogy fan, belonging to bounty hunter Boba Fett (Temuera Morrison) — by helping the people of Mos Pelgo slay a Krayt dragon that had been wreaking havoc for a lengthy period of time.

Between perfectly placed quips — like a masterful reference to the Sarlacc pit Boba Fett (then played by Jeremy Bulloch) tried to throw Han Solo (Harrison Ford) into in Star Wars: Episode VI – The Return of the Jedi (1983) — the mission is accomplished, thanks to help from a Tusken raider clan, and Vanth walks off into the Tatooine double sunset, never to be seen again in the second season of The Mandalorian.

Is that the last we’ll see of Cobb Vanth?

It seems strange that Favreau, Filoni, and their creative team would go to the effort of casting an actor as well-known as Timothy Olyphant in a role as memorable as devil-may-care Marshal Cobb Vanth and give him approximately 20 minutes of screen time.

Maybe, just maybe, they were giving us a teaser of things to come. Jon Favreau recently confirmed that one of three Mandalorian spinoffs, The Book of Boba Fett — featuring Temuera Morrison reprising his role as the bounty hunter and Ming-Na Wen returning as sharpshooter Fennec Shand — will debut in December 2021.

This would be the perfect opportunity for Favreau and Filoni to reintroduce Vanth to Mandalorian fans. There are several reasons for this.

First, thanks to the post-credits scene following The Mandalorian Season 2 finale (“Chapter 16: The Rescue”), we know that Fett and Shand will be returning to Jabba the Hutt’s former palace — occupied by the Hutt crime lord’s righthand man, Bib Fortuna (that is, until Fett kills him) — on Tatooine. Since Vanth is already on Tatooine, it would serve to reason that he may show up at some point during the upcoming series.

Furthermore, Vanth and Fett are inextricably connected as a result of Boba Fett’s armor. Although we don’t know precisely where in the recently revamped Star Wars timeline The Book of Boba Fett will take place, we do know it will somehow connect to The Mandalorian saga, so it serves to reason that cameo appearances — or even regular appearances — will be made by characters who have already appeared in The Mandalorian and, potentially, its other spinoffs, Ahsoka and Rangers of the New Republic.

If Vanth does return in The Book of Boba Fett, maybe we’ll finally learn exactly how Fett escaped from the Sarlacc pit — are you buying that the beskar armor was too tough, or do you think there’s more to the story? — and how the Marshal came into possession of some of the most (in)famous armor in the galaxy.

Neither Disney nor Lucasfilm has confirmed anything about Timothy Olyphant’s Cobb Vanth returning to the Star Wars universe at this time. Stay tuned to Inside the Magic for everything Mandalorian.

Comments Off on Are You Ready For More Marshal Cobb Vanth? We May See Him This Year