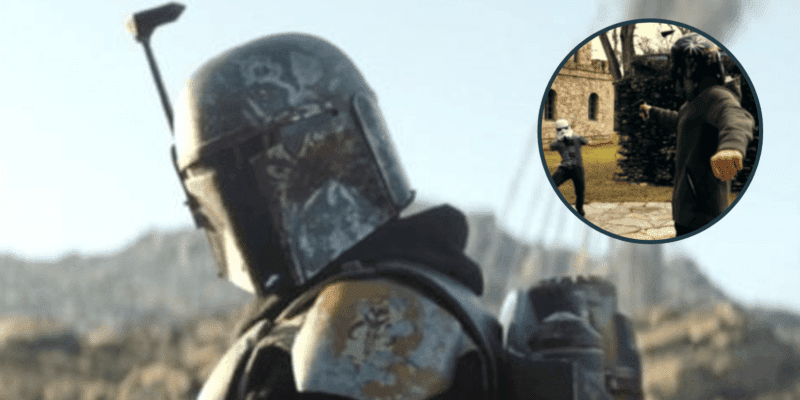 For many long time Star Wars fans, one of the greatest moments of The Mandalorian Season 2 was Boba Fett’s (Temuera Morrison) triumphant return to the Star Wars universe.

In the timeline of The Mandalorian, Jango Fett’s son hadn’t been seen in approximately five years, ever since the unfortunate Han Solo (Harrison Ford) Sarlacc pit incident in Return of the Jedi.

When he landed Slave I on Tython in The Mandalorian Season 2, Episode 6 (“Chapter 14: The Tragedy”) — sharpshooter Fennec Shand (Ming-Na Wen) along for the ride — Fett was determined to get his armor back from Din Djarin (Pedro Pascal) who had previously earned it back from Mos Pelgo Marshal Cobb Vanth (Timothy Olyphant) in Season 2, Episode 1 (“Chapter 9: The Marshal).

If you felt like Fett’s return played out a lot like kids playing Star Wars in the backyard — with, of course, the addition of Grogu (AKA The Child AKA Baby Yoda) sitting on the mystical Jedi Seeing Stone — then you’d be…well, exactly right. The episode’s director, Robert Rodriguez, recently shared exactly how he staged the scene. According to Yahoo!:

“Boba was my favorite, so I was really excited I got to do that and just do him,” Rodriguez shared. “I want to give him a showcase because I was 12 when Empire Strikes Back came out and they were talking Boba Fett before the movie came out. The marketing was really pushing him, so you really thought he was gonna have a huge role in it, so I really wanted to satisfy that need for more Boba in this.”

After pointing out that he wanted Fett’s fighting style to be in contrast with Mando’s, Rodriguez says the way he visualized this was to have his young sons play-out Boba Fett’s comeback in his backyard.

“To illustrate what I was talking about, I took my Boba Fett and Stormtrooper Halloween costumes, and put them on my sons, and went to the backyard and filmed Boba’s arrival.”

To further get a sense of what the scene would be like, Rodriguez used his own action figures “because I didn’t have stuntmen.”

Where will we see Boba Fett next?

Next up for Fett and his beskar — and his newly minted righthand woman, Shand — The Book of Boba Fett, debuting on Disney+ in December 2021.

According to Mandalorian creator and showrunner Jon Favreau, the Boba Fett spinoff show is “the next chapter” of The Mandalorian saga. Although few details are known, we did get a few clues about what we’re in for during The Mandalorian Season 2 finale post-credits scene, which we’ve previously described as:

After depositing Din Djarin and his crew of unlikely heroes — including Cara Dune (Gina Carano), Bo-Katan Kryze (Katee Sackhoff), and Grogu — Fett and Shand left in Slave I and weren’t seen again until the post credits scene that took us back to a very familiar Tatooine location, Jabba the Hutt’s palace.

We, like all Mandalorian fans, can’t wait to see what happens next.