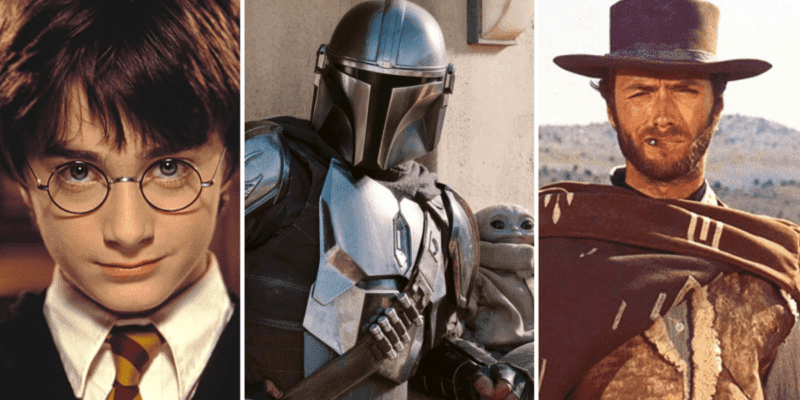 The hit Disney+ series The Mandalorian has taken the world by storm. It is the most in-demand streaming series and, thanks to the premiere of Season 2 on October 30, new Star Wars fans are being born every day.

What The Mandalorian does best is the appeal to old and new Star Wars fans alike. This is a challenging line to toe since many fans have followed a galaxy far away since Star Wars: Episode IV – A New Hope (1977) has extreme opinions about even the most seemingly minute details.

At one point, Cobb Vanth (Timothy Olyphant) quips, in reference to a Krayt Dragon, “There is if you eat the Sarlacc.”

The beast in question is, presumably, the one Solo nearly lost his life to. It’s hidden gems like these that both pander to the original fandom and make sense with the current storyline that makes The Mandalorian uniquely appealing to all Star Wars fans — even those who had never watched a single Star Wars movie or show before Baby Yoda hit the scene last year.

Unlike other spinoffs or new stories inspired by movies, The Mandalorian breathes new life into old tales. Tatooine and flying through the galaxy never looked so refreshing.

Creator and writer Jon Favreau and Executive Producer and writer Dave Filoni brought something entirely new to Star Wars. They’ve mixed movies, television shows, and books all into one epic series — and they’ve done it with aplomb.

However, Mando’s story is not a new one. Let’s take a look at five movies that inspired the immensely popular Star Wars Disney+ show.

Nearly every one of today’s films can be traced back to Italian Director Sergio Leone’s three epic western films: A Fistful of Dollars, For A Few Dollars More, and The Good, the Bad, and the Ugly. Their low-budget innovation in storytelling defined the term “spaghetti western.”

The Good, the Bad, and the Ugly, in particular, had a significant influence on The Mandalorian. Much of the “gunslinger” look that Din Djarin (Pedro Pascal) exudes in the series pays homage to Clint Eastwood’s portrayal of ‘The Man with No Name.’ Their stances are identical, as well as their “antihero” personas. Both cowboys refuse to be titled “good” men, but their deeds are sinless (despite the killing, mainly ever done with just cause).

The first episode of Disney’s The Mandalorian was a near remake of The Good, the Bad, and the Ugly‘s plot of racing to an unmarked grave for treasure, except, in this case, the “treasure” was The Child (AKA Baby Yoda), who shows up as Din’s bounty in the pilot episode of the series.

Eastwood’s character in the classic western is only provided with a name on a grave-marker and nothing else, similar to how Din had barely anything to go off of when it came to finding his living bounty.

Definitely give those three spaghetti westerns a watch!

4) Harry Potter and the Chamber of Secrets

In the second episode, Chapter 10, in Season 2 of The Mandalorian, there’s an uncanny resemblance between Harry Potter and the Chamber of Secrets and the Star Wars show.

While the Jedi are called “wizards,” there’s a scene from Harry Potter that is nearly identical in the Disney show:

While The Mandalorian and The Child discover the Frog Lady in the hot springs after crashing the Razorcrest into the ice-planet, the company is chased off and nearly killed by hundreds of deadly Knobby white spiders.

As Entertainment Weekly points out, these spiders are another original trilogy throwback:

….[they are nearly identical to drawings from] famed Star Wars artist Ralph McQuarrie for “knobby white spiders” that could have been on Yoda’s planet Dagobah in 1980’s The Empire Strikes Back:

While we’re not claiming that Star Wars stole the idea of spiders chasing protagonists through rough terrain, it was a fresh take on a classic film series. The Mandalorian perfectly executed fear and escape from nasty little spiders, just like in Harry Potter and the Chamber of Secrets.

A lawless, “every man for themselves” ther=me is nothing new in films like Mad Max, but these four movies portray that message better than nearly any other standalone film or franchise. The post-apocalyptic genre was accepted into mainstream media after George Miller’s first Mad Max in 1979.

The Mandalorian takes place approximately 5 years after the fall of the Empire in the events of Star Wars: Episode VI – Return of the Jedi.

In the first season of the series, Greef Carga tells Din, “The Empire is gone, Mando. All that are left are mercenaries and warlords. But if it bothers you, go back to the Core and report them to the New Republic.” Although the New Republic exists in the Core, Outer Rim planets, such as those Mando typically finds himself chasing bounties on, were largely lawless during this period in galactic history.

Much like in the Mad Max films, commodities like oil and metals are treasured as prize currency. The Mandalorian only gets enough money to refuel and then crash in inhospitable planets in the Outer Rim. Both antiheroes — Mad Max and Din Djarin — fight for what’s right, but only to survive in their respective post-apocalyptic worlds.

Movies like The Searchers, The Magnificient Seven, and Star Wars: A New Hope all touch on themes, camera angles, and storylines from Seven Samurai. It was the first Japanese movie audiences saw and gave birth to the American Western genre.

A veteran samurai, who has fallen on hard times, answers a village’s request for protection from bandits. He gathers 6 other samurai to help him, and they teach the townspeople how to defend themselves, and they supply the samurai with three small meals a day. The film culminates in a giant battle when 40 bandits attack the village.

We see this plot reused in The Mandalorian episodes like Chapter 4: Sanctuary, where Din Djarin and Cara Dune liberate a village of helpless farmers from deadly mercenaries (that’s pretty much Seven Samurai and The Magnificient Seven), and the premiere of season two, Chapter 9, where Mando and Marshal Cobb Vanth kill the Krayt Dragon to free the small town of Mos Pelgo.

1) Indiana Jones and the Last Crusade

One of the greatest films of all-time had a considerable part in the beginnings of The Mandalorian.

Before Star Wars returned to Tatooine, the Disney+ show writers Jon Favreau and Dave Filoni had to rewatch Indiana Jones and the Last Crusade to perfectly capture the Jawa Sandcrawler fending off a Mandalorian warrior stuck to its side.

Towards the end of Indiana Jones and the Last Crusade, Indy is hanging on for dear life on the side of a German tank as he attempts to rescue his father and companion Marcus Brody. At one point, Indiana Jones is nearly crushed between the tank and the sides of red rocks. The Mandalorian finds himself in a remarkably similar situation in the first season of The Mandalorian.

Although Indy ultimately climbs aboard the tank, Mando is kicked off (literally!).

The Mandalorian is sure a treat and continues to wow its viewers. We can’t wait to see what adventures happen next!

Do you love The Mandalorian? Let us know