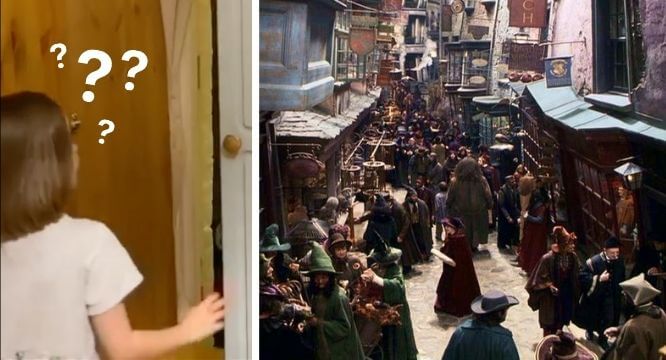 Imagine it is your birthday, and your father comes to you with a magical surprise. A huge surprise during a hide-and-seek game. At the end of it, you find yourself entering a wardrobe in your home and finding you have been transported to a part of the Wizarding World!

That is exactly what happened to Ella. On her sixth birthday her father, Dylan, surprised his little witch with her own Diagon Alley!

Ella’s Dad had the idea to plan and build Harry Potter’s Diagon Alley at their home in Windsor during the pandemic lockdown. He spent months building the surprise for Ella since she is a big Harry Potter fan.

“It was a room that was a nothing room. We never went in it. We just ran through it. Now it’s actually the best room in the house,” Dylan said on an interview to BBC.

Ella’s version of wizarding street is so accurate it even has Ollivanders wand shop, Eeylops Owl Emporium, and Fortescue’s Ice Cream Parlour.

Ella is such a lucky little muggle, or witch, because she got to go to Diagon Alley before her eleventh birthday. And she is also lucky to have crafty dad Dylan as her father!

According to the Harry Potter series, wizards receive their Hogwarts acceptance letter at the age of eleven. From there, they would go to Diagon Alley to shop for their school supplies before arriving at Hogwarts.

Who knows, this might inspire to enrich her love for the wizarding world and end up as smart and clever as Hermione Granger!

What did you think of this magical surprise? Would you like to have your own Diagon Alley, or maybe even Hogsmeade, in your home? Let us know in the comments below.