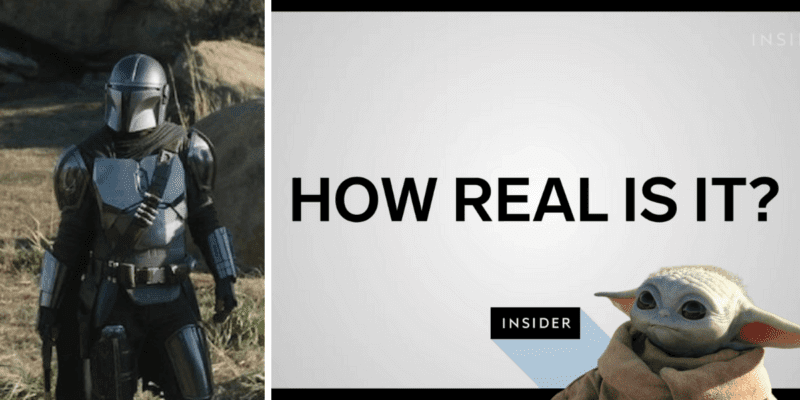 Ever since Boba Fett first appeared on screen, Mandalorian armor has become one of the most defined and recognizable costumes in the Star Wars universe. And while the armor is made of a fictional metal (beskar) from a fictional planet (Mandalore), it appears that the real-world legitimacy of the armor is extremely accurate.

Entertainment Insider shared a video in which medieval weapons master, Tony Capwell, sat down to review clips of Din Djarin’s armor in Disney+’s Star Wars: The Mandalorian and how the armor appears and is employed. Specifically, “how real is it?” His finding may surprise you.

Mandalorian Armor in a Fight

Looking at fight scenes from the first and second season premieres, Capwell noticed both the practicality and realism in Mando’s armor. Specifically how the beskar armor allowed him to take a hit and keep on going.

“In a complete armor, a medieval knight can suffer horrendous physical punishment that would kill an unarmored person [snaps] like that,” he explained. “But, you can take the hits, and in armored combat, there are times when you decide to let your opponent hit you because you know you can take it and you’re going to do something else. You’re not going to waste time defending what doesn’t need to be defended.”

Capwell also states the armor “has narrative significance. It’s storytelling. He can take a shot right in the chest, so that’s a pretty big character point, wouldn’t you think?”

One of the best examples of this character trait was seen in Season 2 when Djarin charged directly into the line of stormtrooper fire, taking hit after hit in order to help Bo-Katan and his fellow Mandalorians take an Imperial ship. We also saw this in how the former bounty hunter was able to fend off Ahsoka Tano’s attack in the Season 2 episode ‘The Jedi.”

Proper late-medieval armor, he explained, was not supposed to be big and clunky with a lot of room underneath. It was supposed to be custom fit to the wearer as, essentially, and armored skin. Using Din Djarin as an example, he says, “He’s not clunking around all cumbersome. He moves like a real knight… He hardly ever takes his helmet off and yet you know everything about his expressions, his feelings, his character.”

Looking at the helmets of Djarin and “The Armorer,” our armor expert sees real-world inspiration in the Mandalorian design. Especially the helmets.

“It’s got a couple of possible sources of inspiration,” he explained. “On the one hand, it looks a lot like an ancient Greek hoplite’s helmet, the ancient Greek heavy infantry of, like, 500 BC or of thereabouts These very distinct spectacled helmets with these eye cutouts, the nasal for the nose and the cheeks brought in. In the bronze age, they’re trying, again, to get as much protection for the face and the head as they possibly can. So that’s where that really closely set kind-of spectacled profile comes from.” Capwell also shared how that design was also revitalized in the Italian Renaissance.

Entertainment Insider’s video showed examples of the Classical and Renaissance designs and the resemblance to the Mandalorian’s was uncanny.

He also touched on the importance of the connection a knight has with his armor, suggesting what Favreau and Filoni are doing with The Mandalorian is, in a way, groundbreaking.

“Historically, a knight has a very close personal relationship with his armor,” he said. “The armor is responsible for his safety, but he’s also the guy who’s going to mold your character. It’s never really been explored until this.”

Despite Jon Favreau’s Space Western being set in a Galaxy Far Far Away, our medieval armor expert gives Mandalorian Armor a realism score of 10/10.

You can watch the full segment here. His critique of The Mandalorian begins at :30 and runs through 4:03.

Watch a medieval weapons master rate 11 weapons and armor in movies and TV.

Every episode of Season 1 and Season 2 of The Mandalorian is available for streaming now on Disney+. Season 3 is scheduled to be released around Christmastime 2021.

What do you think about Mandalorian armor? Let us know in the comments!

Comments Off on How Real Is It?’ Expert Reviews Din Djarin’s Armor in ‘The Mandalorian’