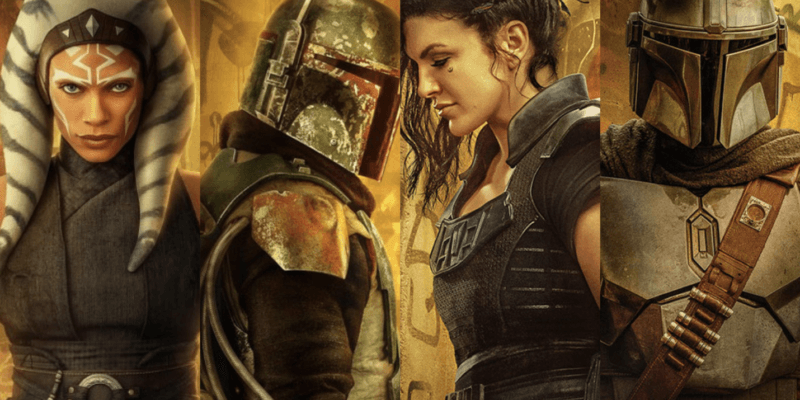 During Lucasfilm’s portion of The Walt Disney Company’s 2020 Investor Day event, Lucasfilm President Kathleen Kennedy stated that the hit Disney+ series The Mandalorian has “ushered in a new era” within the Star Wars universe.

The executive then went on to confirm that, among the numerous new Star Wars series coming to the streaming platform, would be two direct spinoffs of The Mandalorian — Ahsoka and Rangers of the New Republic.

Kennedy did not, however, specifically mention The Mandalorian Season 3. Here, we share everything we know so far — for sure — about the third season of Jon Favreau and Dave Filoni’s hit series.

Ahsoka, Rangers of the New Republic, and The Book of Boba Fett will interconnect.

At Investor Day, Kennedy confirmed that Ahsoka — which will feature Star Wars Rebels and Star Wars: The Clone Wars fan-favorite Ahsoka Tano (Rosario Dawson), presumably continuing her storyline from The Mandalorian Season 2, Episode 5 (Chapter 13: The Jedi), searching for Grand Admiral Thrawn and Ezra Bridger — and Rangers of the New Republic — which is likely to be the rumored Cara Dune (Gina Carano) spinoff — will both be set in the timeline of The Mandalorian and will interconnect to the show.

As a matter of fact, Kennedy said the trio of series will ultimately culminate in a live-action streaming event, about which no further details have been shared at this time.

During a Good Morning America interview in early January 2021, Mandalorian creator and showrunner Jon Favreau confirmed that The Book of Boba Fett — which seems as if it will be set on Tatooine if the post credits sequence in Jabba the Hutt’s former palace is any indication — will also be connected to The Mandalorian, but did not say if the Boba Fett show will play a role in the aforementioned streaming event within the Star Wars universe.

Temuera Morrison is set to reprise his role as the iconic bounty hunter, and Ming-Na Wen will be back as sharpshooter and mercenary, Fennec Shand.

Pedro Pascal is returning for the third season.

Even though not much has been confirmed about The Mandalorian Season 3, we do know some crucial details for sure. For example, Din Djarin (Pedro Pascal) will be back for the third season of the Star Wars streaming series.

No spoilers!!! But just in case the world didn’t know yet @pascalispunk is incredible. The journey they wrote for him this season was so beautiful. The fact that Pedro went beyond the page and made this epic. Thank you @pascalispunk

Yes!! Pedro is coming back and awesome . There was never any question. DO NOT BELIEVE EVERYTHING YOU READ. Now let’s get ready for WW84 @wonderwomanfilm

“So this [The Book of Boba Fett series or mini-series] is actually separate from The Mandalorian Season 3. But, what we didn’t say in that announcement is that the next show coming up, Kathy said the ‘next chapter’ and that’s going to be the Book of Boba Fett and then we go into production right after that on Season 3 of The Mandalorian back with the main character that we know and love.”

Favreau also confirmed that The Book of Boba Fett will film and enter post-production before The Mandalorian Season 3 begins filming.

We do not know an exact premiere date (but a filming date has been confirmed!)

During Lucasfilm’s Investor Day presentation, Kennedy shared that “the next chapter will begin Christmas 2021,” while an image of Din Djarin in his beskar armor flashed on the screen behind her.

The presumption, among both Star Wars fans and news outlets, was that this meant The Mandalorian Season 3 would premiere — alongside Ahsoka, Rangers of the New Republic, and The Book of Boba Fett — in December of next year.

However, when Disney’s official 2021 release schedule was unveiled, the third season of The Mandalorian, Ahsoka, and Rangers of the New Republic were notably absent.

The Book of Boba Fett was the only spinoff with a 2021 release. Animated series Star Wars: The Bad Batch — which is set to feature an animated version of Fennec Shand, voiced by Wen — will also premiere sometime in 2021.

On January 26, 2021, Orlando area reporter Scott Gustin confirmed, via Production List, that The Mandalorian Season 3 will begin filming on April 5 in Los Angeles, California. At this time, only Pedro Pascal is confirmed to return for the eight-episode season, per IMDb.

Season 3 of The Mandalorian will start filming in April. https://t.co/cyNZm1ZogS pic.twitter.com/XSHUEpNkIy

As stated, titular Mandlaorian Din Djarin will be back for The Mandalorian Season 3. No concrete casting details outside of this have been shared at this time.

Given how things ended with two major story arcs — Grogu (AKA The Child AKA Baby Yoda) and the Darksaber — in the Season 2 finale (Chapter 16: The Rescue), it seems likely that Bo-Katan Kryze (Katee Sackhoff) and her Nite Owl Mandalorian warriors, including Koska Reeves (Sasha Banks), and Luke Skywalker (CGI Mark Hamill in the finale/possibly Sebastian Stan in the future) could be back.

In a January 2021 interview with YouTube channel, The Sith Council, actress Sackhoff shared that there was “a reason” Nite Owl Axe Woves (Simon Kassianides) was seemingly missing-in-action during the Season 2 finale. She indicated this story will be told at a later date, more-or-less confirming the actor’s return and, thereby, her own.

There also exists the potential for a Moff Gideon (Giancarlo Esposito) return, since Djarin spared his life after winning the duo’s beskar spear vs. Darksaber battle.

The status of Grogu’s return in the third season of The Mandalorian also remains unconfirmed at this time.

Although the Skywalker Saga officially ended with Star Wars: Episode IX – The Rise of Skywalker (2019), we may see additional iconic characters from the Star Wars galaxy return in future seasons of The Mandalorian.

Star Wars Legends tales could be made canon.

Due to this, Thrawn is a shoo-in to play the villain in Dawson’s spinoff, Ahsoka, and perhaps even become a Marvel-like supervillain in the entire Mandalorian saga. Robert Downey Jr. is rumored to be in consideration for the role.

The Star Wars fan community can stay up-to-date on everything that went into the making of The Mandalorian Season 2 with a special edition of Disney Gallery: The Mandalorian that debuted on Disney+ on Christmas Day 2020. The behind-the-scenes look includes glimpses of Jon Favreau and Dave Filoni’s creative process as they strive to create a “masterpiece” TV series with every episode.

Stay tuned to Inside the Magic for all of the latest details about the upcoming season of The Mandalorian from creator Jon Favreau and other Lucasfilm and Disney executives.

Comments Off on ‘Mandalorian’ Season 3: Production Dates, Casting, & Everything You Should Know