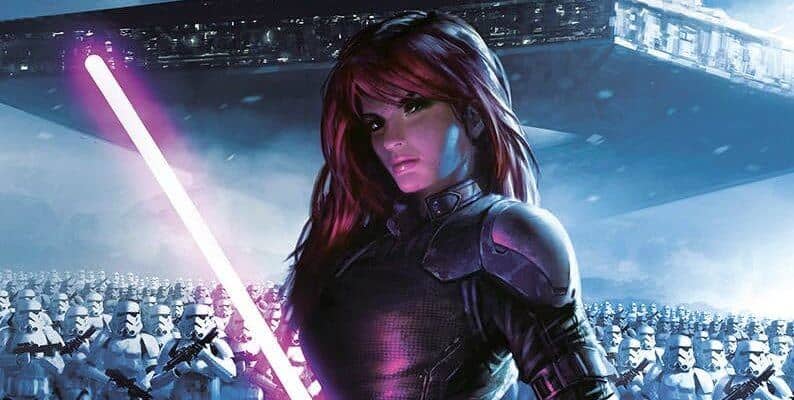 The Star Wars Expanded Universe — or, Star Wars Legends — features all sorts of characters and stories that are not part Star Wars canon materials.

Luke also, however, has a wife named Mara Jade, who is among the most popular characters in Legends lore. She and Luke even have a son, Ben Skywalker, in the Expanded Universe.

Now, particularly with the fact that another fan-favorite Legends character — Grand Admiral Thrawn (voiced by Lars Mikkelsen in Star Wars Rebels and rumored to be portrayed by Marvel icon Robert Downey, Jr. in live-action) — is poised to appear in The Mandalorian saga as the villain in spinoff series Ahsoka, it seems like Mara Jade could also be set to make her live-action debut, officially bringing her into Star Wars canon.

Interestingly, Mara Jade is actually featured in the Legends Thrawn trilogy — the novels in which Grand Admiral Thrawn was initially introduced to the Star Wars universe at large.

Skywalker, as all Mandalorian fans undoubtedly know by now, made a surprise cameo appearance — thanks to CGI de-aging technology used on Mark Hamill — in the Season 2 finale, “Chapter 16: The Rescue.”

Grogu — after a tearful goodbye scene with Djarin — left with Skywalker and iconic droid R2-D2. This is where Mara Jade could potentially enter The Mandalorian saga. Per Nerdist’s assessment:

…[now that he is being trained by Luke Skywalker] Grogu is going to need some help getting around. Trained in the ways of the Force or not, he’s still going to be an infant. He’s not flying ships, or likely even talking yet. So he will need an adult to escort him wherever he’s going. Normally, we’d say that person would be Luke himself. But recreating Luke in CGI as a regular character would be extremely cost-prohibitive. So instead of Grogu coming back with Luke, what if it’s another early student of Luke’s, in the form of Mara Jade?

Mara’s backstory from the Legends canon could largely remain the same. She could still be the former Emperor’s Hand, who trains under and falls in love with Luke. But given how stringent Luke is with the rules of the Jedi Order at this point, we don’t think he’d allow himself to form a romantic attachment.

Much like Obi-Wan Kenobi (voiced by Ewan McGregor) with Duchess Satine Kryze (voiced by Anna Gray) — Bo-Katan’s sister — in Star Wars: The Clone Wars, it is likely that at The Mandalorian’s point in the Star Wars timeline (approximately five years after Star Wars: Episode VI – The Return of the Jedi (1983)) Skywalker would walk away from any romantic attachment.

This could, potentially, free-up Mara Jade to be Grogu’s escort around the galaxy.

Nerdist also shared details about how they see Mara Jade’s involvement in the overarching Mandalorian storyline playing out:

As we see in the episode “The Jedi,” another Force user like Ahsoka [Ahsoka Tano (Rosario Dawson) was Anakin Skywalker’s Padawan and appeared in The Mandalorian Season 2] could connect with Grogu and translate his thoughts for everyone else. After all, that’s how Ahsoka learned Grogu’s name. Mara could be the C-3PO to Grogu’s R2, in a way. And not only could she translate for Grogu, she could also be his bodyguard. Even if the baby is Force-trained, lightsaber action is probably out of the question for him.

This is an intriguing notion and could, in theory, give Star Wars fans deeper insight into Grogu’s past — and present — as a powerful Force-sensitive being. At this time, Mandalorian showrunner and creator Jon Favreau and executive producer Dave Filoni — who also worked on Clone Wars — have not shared any details about whether or not Mara Jade could be brought into official Star Wars canon via The Mandalorian.

It actually isn’t far-fetched for Mara Jade to become a part of the current canon. Star Wars creator George Lucas had wanted to create a female character as a love interest for Luke in his version of the sequel trilogy. Before this could happen, of course, Lucas sold Lucasfilm to The Walt Disney Company and his sequels were scrapped in favor of the existing Star Wars: Episode VII – The Force Awakens (2015), Star Wars: Episode VIII – The Last Jedi (2017), and Star Wars: Episode IX – The Rise of Skywalker (2019).

This would not be the first time a real person has portrayed Mara Jade. Model Shannon McRandle (AKA Shannon Baksa) previously depicted the Legends character in the 1990s Star Wars Customizable Card Game and other promotional materials.

Since Mara Jade Skywalker is one of many fans’ favorite characters who does not currently appear in canon, it wouldn’t be surprising to see Favreau and Filoni cast someone to portray her. They have proven their willingness to take the Star Wars EU and run with it, as is evidenced by the inclusion of Thrawn.

What do you think? Should Luke Skywalker’s wife, Mara Jade, appear in The Mandalorian? Or, would you prefer to see her somehow worked into a future Star Wars movie?