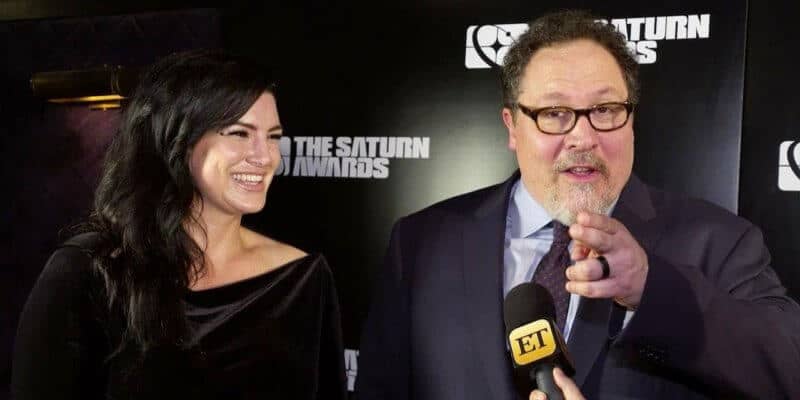 The ongoing social media frenzy that surrounds actor and women’s MMA fighter Gina Carano has only seemed to pick up speed once again, with the #FireGinaCarano resurfacing on Twitter. The Mandalorian star who plays ex-mercenary and the current Nevarro New Republic Marshal Cara Dune has been heavily under fire on social media throughout the bulk of Season 2, but so far has emerged without burns. It seems Gina may have the show’s creator, Jon Favreau, to thank for that.

There is now knowledge that Jon Favreau, unlike the rest of Lucasfilm, is not publically political, nor does he care about what others stand for — including Gina Carano’s controversial right-wing beliefs. Author WDW Pro writes, “I’m told that the feeling inside Lucasfilm is generally disdain for Carano as well. The problem for all of those who hate Carano based on her worldview and political positions is that Jon Favreau isn’t publicly political… and word on the street is he doesn’t care one iota for the divisiveness. If Carano was employed in any other part of Lucasfilm, she’d be gone, and she would have been let go long ago.”

Of course, this has not been confirmed by Disney at this point, however, it wouldn’t be highly shocking to hear that there are some at Lucasfilm who do not agree with Gina Carano’s political and social beliefs.

The article makes the argument that it is not Kathleen Kennedy, President of Lucasfilm, who controls the narrative for The Mandalorian, but rather Jon Favreau and Dave Filoni. Whether or not Favreau and Filoni truly have the ability to override Kennedy regarding Mandalorian characters’ development is not for certain, but if these reports are indeed fact, Carano’s beliefs would never pose a threat to her role as Cara Dune in the Star Wars series.

Interestingly enough, we previously reported another rumor that Disney has asked Carano to apologize. Although it was not stated, we at Inside the Magic assumed that the apology in question would be for some of the Tweets she has shared to her account amid the ongoing coronavirus pandemic. Disney nor Lucasfilm have yet to publicly comment on Carano’s controversy, and no public apology has been posted.

In fact, following Walt Disney Company CEO Bob Chapek’s recent statement regarding the riots at the United States Capitol building, #FireGinaCarano once again appeared on Twitter after Carano began liking various Tweets made by apparent riot supporters. Gina Carano seemingly responded to the backlash with a Princess Bride quote — so an apology does not seemingly appear to be at the forefront of Carano’s mind.

Carano has not just been met with anger on social media as of late, but also felt plenty of love from Star Wars and Mandalorian fans alike! #WeLoveCaraDune/#IStandWithGinaCarano has also been trending in recent weeks, so although Carano may garner lots of attention, it is clearly double-sided.

Plus, Favreau is not the only one on Team Mando to support Carano amid the public controversy. Pedro Pascal (Din Djarin) has publically posted his allegiance with Carano as well as complemented and praised her work as Cara Dune — even though the Mandalorian actor is quite opposite in terms of beliefs to Carano.  Katee Sackhoff (who plays Bo-Katan Kryze) has also spoken about Carano as her best friend, even after seeing her as “competition” career-wise for 10 years.

As for where Gina Carano will end up next in the world of Star Wars is still a question at large. After The Mandalorian Season 2, Episode 8 (Chapter 16: The Rescue), we saw Cara Dune (Gina Carano) alongside Bo-Katan Kryze (Katee Sackhoff), as well as her Nite Owl warrior Koska Reeves (Mercedes Varnado/Sasha Banks), Din Djarin (Pedro Pascal), Boba Fett (Temuera Morrison), Fennec Shand (Ming-Na Wen) — defeat Moff Gideon (Giancarlo Esposito) and rescue Grogu (AKA Baby Yoda) from the Imperial ship.

Now, rumors have been swirling that Dune would be getting her own spin-off series with Rangers of the New Republic, considering that Carano’s character spent the majority of Season 2 doing just that. That all being said, considering how Disney nor Lucasfilm has commented on what is happening with casting in the series, it is purely all speculation at the moment.

The Mandalorian has been confirmed for the third season, but with Grogu seemingly out of the picture (after being taken away by CGI Mark Hamill AKA Luke Skywalker), the storyline could take its audience to many different places.

Stay tuned to Inside the Magic as we continue to follow Carano’s journey through the Star Wars canon!