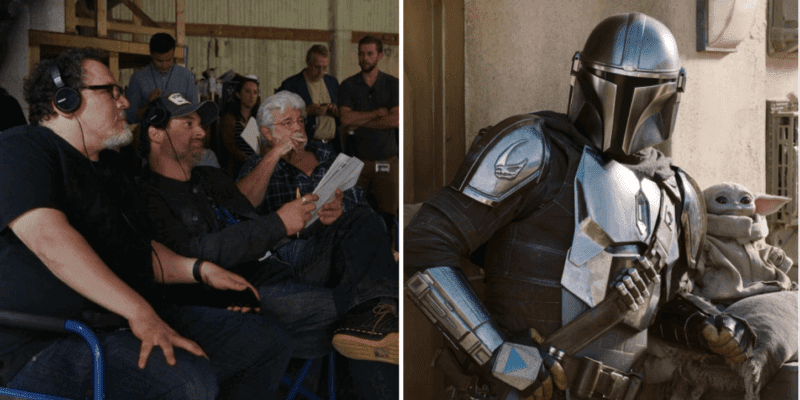 Now, over 40 years after the original trilogy started and over a year since the Skywalker Saga ended with Star Wars: Episode IX – The Rise of Skywalker (2019), Star Wars fans are more excited about the franchise than they have been in quite some time — thanks, mostly, to showrunner Jon Favreau and Dave Filoni’s hit Disney+ series, The Mandalorian.

Since the show debuted on November 12, 2019, it has captured the minds (and hearts) of both old and new Star Wars fans and has turned the adventures of bounty hunter Din Djarin (Pedro Pascal), Grogu (AKA The Child AKA Baby Yoda), and their motley band of companions — including Star Wars Rebels’ and Star Wars: The Clone Wars’ character Ahsoka Tano (Rosario Dawson) and the iconic Boba Fett (Temuera Morrison) —  into a pop culture sensation.

Franchise creator Lucas, who gave up creative control of the Star Wars universe when he sold Lucasfilm to The Walt Disney Company in 2012, has never been officially named as a consultant on the show, but has visited the set — and even famously “met” the Grogu puppet at one point!

Now, however, it seems that Lucas could be playing a much larger role in The Mandalorian saga moving forward.

A new report indicates that Lucas will be “more heavily involved” with the upcoming season of The Mandalorian — Season 3 — than he has ever been before. No additional details are offered and Lucas’s involvement has not been confirmed by Disney or Lucasfilm executives at this time.

Given that Lucas worked closely with Mandalorian executive producer Filoni on the animated Clone Wars series and, therefore, has a vested interest in some of the characters that have been introduced in live-action for the first time — the aforementioned Tano, Bo-Katan Kryze (Katee Sackhoff), and Nite Owl warrior Koska Reeves (Mercedes Varnado/Sasha Banks) all come to mind — it wouldn’t be surprising to see the 76-year-old Star Wars creator get more involved as the series moves forward into its third season.

Related: Lucas Talks Prequels: “I’m Making a Movie That Nobody Wants to See”

From these statements, it’s easy to deduce that Lucas may not be done with Star Wars world-building just yet.

With the Emmy-winning The Mandalorian — and it’s three upcoming spinoffs, Ahsoka, Rangers of the New Republic, and The Book of Boba Fett — being by far the most popular part of the Star Wars universe right now, it serves to reason that if Lucas is going to return in a meaningful capacity, it would be via the incredible streaming saga.

The Star Wars fan community would likely welcome Lucas‘s involvement in Mandalorian Season 3, as long as Favreau and Filoni — who have become incredibly popular — remain the driving forces behind each new episode.

Again, Lucas’s potential involvement in The Mandalorian is merely a rumor at this point and nothing has been confirmed.

Stay tuned to Inside the Magic for everything Mandalorian and don’t forget to register for our newsletter below.