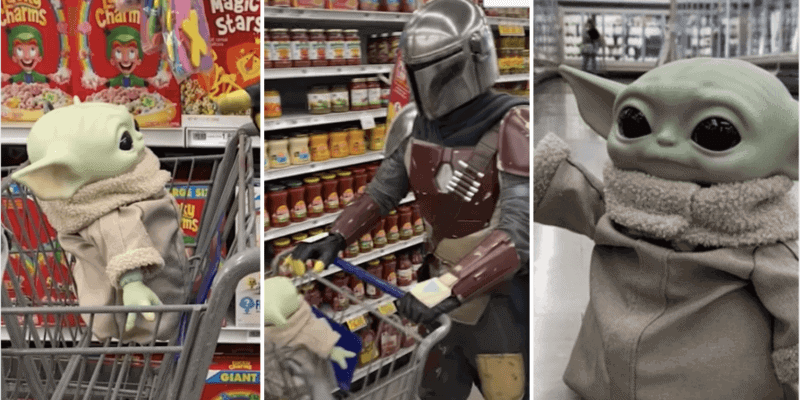 Ever since Disney+ subscribers first laid eyes on Grogu (AKA The Child AKA Baby Yoda), he’s been inspiring all sorts of content all over the internet — from Mandalorian memes to fan fiction to an entire Instagram account, Star Wars fans can’t get enough of the tiny green foundling.

Now, a TikTok user has created a truly hilarious video in which Din Djarin (played by Pedro Pascal in the hit series) and Grogu have seemingly found themselves on Earth and in need of sustenance.

Djarin visits his local Food Lion grocery store with Grogu in tow — as you can imagine, chaos ensues. Djarin loses his charge, who doesn’t listen to instructions to remain safely in the cart and, instead, goes (unsurprisingly) in search of snacks.

It doesn’t seem, however, that the American grocery chain has exactly the snacks he’s looking for — no blue macarons or frog eggs on the shelves. The rest, you’ll have to watch for yourself.

The video was shared in full on Trey Eversman’s YouTube channel, which also features a number of other Mando inspired online videos:

What’s next for Grogu in The Mandalorian?

When we last saw Grogu in The Mandalorian Season 2 finale, he was leaving Moff Gideon’s (Giancarlo Esposito) Imperial cruiser to complete his Jedi training with Luke Skywalker (a CGI de-aged version of Mark Hamill) and beloved droid R2-D2.

After an emotional good-bye scene in which Grogu got to touch Djarin’s maskless face for the first time, we are now left wondering exactly what will happen to the cutest character in the galaxy next.

Mandalorian creator Jon Favreau and executive producer Dave Filoni have given no indication of where Grogu will show up next, but we do know there are multiple options as The Mandalorian saga continues to expand within the Star Wars universe.

Soon after, during The Mandalorian second season finale episode, a third spinoff — The Book of Boba Fett — was confirmed for a December 2021 release.

There have also been rumors of a Luke Skywalker spinoff series potentially featuring Grogu and Sebastian Stan as the iconic Jedi knight.

For now, all we can do is wait to learn more from Favreau, Filoni, and Lucasfilm.

Stay tuned to Inside the Magic for all things Mandalorian! What do you think about the funny video featuring Grogu at the grocery store?