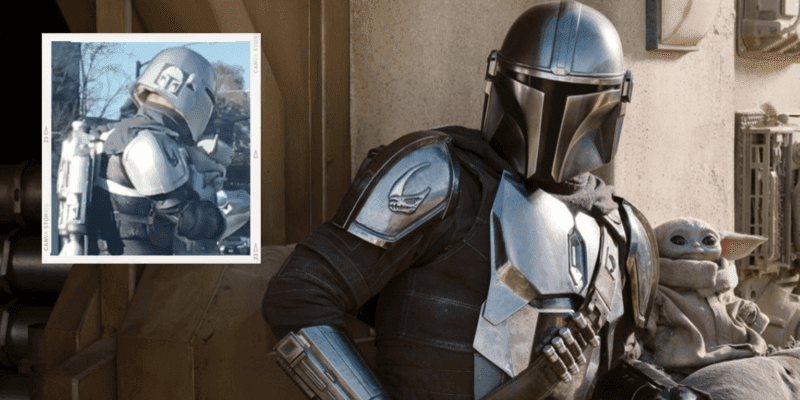 One TikTok user was shocked when a real-life version of The Mandalorian’s Din Djarin seemingly appeared while she was out and about.

Related: See Grogu In Your Home Thanks to Amazing New AR Feature!

They Are My Crocs shared this video [below] on the social media platform, with the caption:

♬ original sound – They are my crocs

The commentary during the video is hilarious, with the original poster gushing:

The Din Djarin lookalike is wearing an impressive costume that looks just like the beskar armor the title character actually wears in Jon Favreau and Dave Filoni’s hit Disney+ series, The Mandalorian.

At one point, he turns and waves at the poster’s vehicle, and viewers can see the adorable Grogu toy that is strapped to his chest. We can’t get over how cute this entire video is, but The Child — as always — takes top honors as the cutest part (just like he does in the Star Wars series!)

The TikTop app and website first enjoyed a surge in popularity at the beginning of the coronavirus pandemic, when people were in quarantine at home, unable to visit movie theaters, stores, or other locations they would normally go in their leisure time.

Viral TikTok video links started surfacing on social media in the spring and the platform has remained something of a pop culture phenomenon ever since. As a matter of fact, if it weren’t for the COVID-19 pandemic, we might never have gotten the TikTok series featuring Ratatouille: The Musical — a faux Broadway-style musical production based on the Disney-Pixar movie, Ratatouille.

If you’ve never spent time on TikTok, there are thousands of Disney and Star Wars videos to keep you occupied for hours — including plenty of Mandalorian clips!

What’s next for The Mandalorian series?

Next up for the actual Din Djarin (Pedro Pascal) — since he isn’t actually skateboarding through cities on Tik Tok — is The Mandalorian Season 3.

Creator Jon Favreau — and Lucasfilm designer Paul Bateman — have both confirmed that the character will be back in December 2021. We don’t know yet, however, if he will see Grogu and his Jedi Master this year or if we’ll have to wait until the streaming event that combines Ahsoka — once again featuring Rosario Dawson as the Star Wars Rebels and Star Wars: The Clone Wars character — Rangers of the New Republic, and The Mandalorian.

It is not yet known if the events that take place in the recently announced The Book of Boba Fett — featuring Ming-Na Wen as Fennec Shand and Temuera Morrison reprising his role as bounty hunter Boba Fett — will also be part of the live-action event that was mentioned during Kathleen Kennedy’s portion of Disney’s 2020 Investor Day event.

The Mandalorian Season 2 finale episode is now streaming on Disney+.

What do you think about this Mandalorian TikTok video?

Comments Off on VIDEO: Real-Life Din Djarin Has Appeared on TikTok