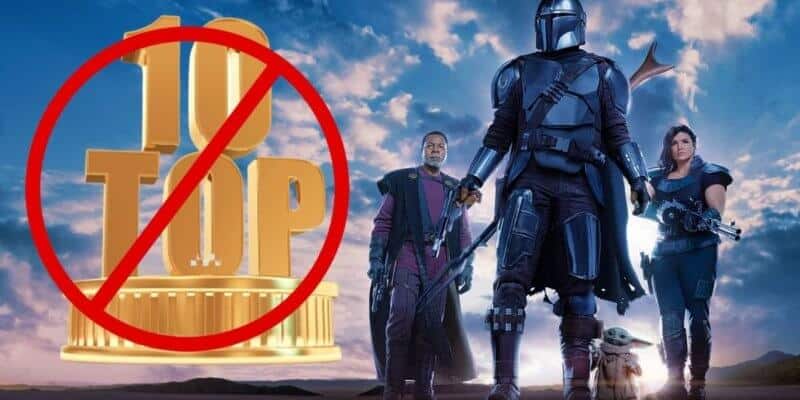 The Mandalorian has taken the world by storm with its second season just concluding on Disney+. Fans have been following along on Din Djarin and Grogu‘s story ever since the show debuted in 2019, but despite the growing popularity, The Mandalorian still isn’t always the top streaming program.

Nielsen released its top ten streaming programs for the week of November 16th through November 22nd and the Star Wars Disney+ series is not number one. In fact, it’s not even in the top three.

According to the data pulled, the top streaming show was Netflix’s The Crown with 40 episodes and 3,358 minutes. Coming in second place was another Netflix show, The Queen’s Gambit, with just 7 episodes and 1,092 minutes. In third place, The Office, also on Netflix, with 192 episodes and 1,067 minutes.

Disney+ showed up in the fourth spot thanks to The Mandalorian, which had 12 episodes at the time of pulling the data and 939 minutes. (The second season has since concluded and now has 16 episodes on Disney+.)

The rest of the shows on the list are all on Netflix, including Schitt’s Creek, Grey’s Anatomy, Great British Baking Show, Criminal Minds, The Boss Baby: Back in Business, and NCIS. Therefore, the only Disney+ show that made the cut was, in fact, the Star Wars phenomenon — The Mandalorian.

Both seasons one and two of The Mandalorian are currently available now on Disney+. The Mandalorian season three has been confirmed and will be hitting Disney+ next winter.

And, on top of a third season of The Mandalorian, Disney+ is also bringing fans several other Star Wars-themed series to the streaming service including The Rangers of the New Republic, Ahsoka, The Book of Boba Fett, an Obi-Wan show, and more. For a full list of what Star Wars series is coming to Disney+, visit our website here.

If you aren’t yet signed up for Disney’s streaming service, you can get started by visiting the Disney+ website here.

Are you surprised to see The Mandalorian not even make the top three spots for Nielsen’s streaming programs for mid-November? Let us know in the comments below.