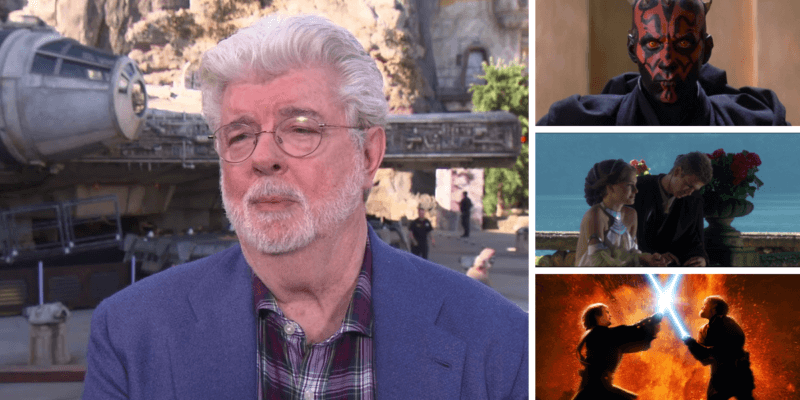 The Star Wars prequel trilogy is one of many divisive topics within the Star Wars fandom and the movies continue to take criticism even nearly two decades after Star Wars: Episode II – Revenge of the Sith (2005) released.

As it turns out, Lucasfilm founder George Lucas already knew that the films may not be popular and, apparently, he didn’t care. This was a passion project and a story he had to tell despite the criticism he might get.

“I told people at Lucasfilm that they’re going to have to face the reality that I’m making a movie that nobody wants to see, but I want to tell that story,” he said in an excerpt of Paul Duncan’s behind-the-scenes book The Star Wars Archives: Episodes I-II 1999-2005 which was shared on Twitter by journalist Adam Frazier. “I’m more interested in telling the story than I am in just doing a franchise where you tell the same story over and over again.”

“I know everybody wants to see Darth Vader in his black suit with his lightsaber, but the whole point of it is: How does this nice little kind kid, who has good intentions, is just like us, go wrong and become Darth Vader?”

“The second part of the story is: How does a democracy become a dictatorship,” Lucas added, mentioning that he struggled with simultaneously telling both Anakin Skywalker’s journey to the dark side along with the wider story that saw the Republic turn into the First Galactic Empire.

Lucas also went on to defend his pet trilogy, arguing that people didn’t understand it and what he was trying to do, especially with the dialogue between Anakin and Padme in Star Wars: Episode II – Attack of the Clones (2002):

“They don’t get that there’s an underlying motif that is very much like a 1930s Western or Saturday matinee serial. It’s in the more romantic period of making movies and adventure films. And this film is even more of a melodrama than the others.”

It was also in this book when Lucas explained why he sold Star Wars and Lucasfilm to Disney. You can read more about that by clicking the link below.

Read More: In His Own Words: George Lucas FINALLY Shares Why He Sold ‘Star Wars’

While Star Wars: Episode I – The Phantom Menace (1999) and the aforementioned Attack of the Clones and Revenge of the Sith received strong backlash at the time on a variety of topics — from the acting performance of both Hayden Christensen and Jake Lloyd to the very existence of Jar Jar Binks, the trilogy has gained more of a following over time, especially through the addition of Dave Filoni’s popular animated Star Wars: Clone Wars series.

The entire Star Wars saga is available for streaming right now on Disney+.

How do you feel about the Star Wars prequel trilogy? let us know in the comments!