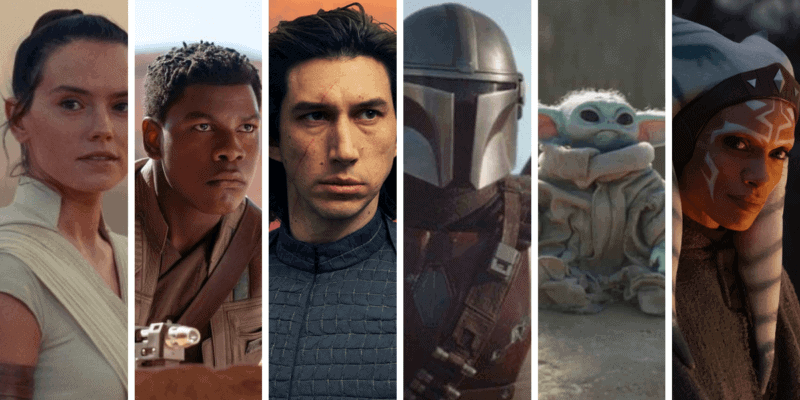 After the debacle that was the Star Wars sequel trilogy — Walt Disney Studios’ first foray into Star Wars‘s traditional trilogy format following The Walt Disney Company’s 2012 Lucasfilm buyout — current Lucasfilm President Kathleen Kennedy said that the Star Wars creative team needed to take a “step back” and reassess where they wanted to go with the Star Wars universe moving forward.

During this August 2020 interview, Kennedy noted how crucial the Disney+ streaming platform would be to the future of the Star Wars franchise — remember that Jon Favreau and Dave Filoni’s hit series, The Mandalorian, debuted on November 12, 2019, so the team already knew how popular bounty hunter Din Djarin (Pedro Pascal) and Grogu (AKA The Child AKA Baby Yoda) were becoming:

“I’ve already seen evidence of it [the success of Star Wars shows on Disney+]. The ability to be very character-driven, with extended storytelling and connected storytelling, I think this space offers us a great opportunity to do that.”

As a result of several factors — the success of The Mandalorian, the general distaste for the sequel trilogy, and the fact that Rian Johnson’s previously announced new Star Wars trilogy seems to have been scrapped — many fans wondered if Star Wars was done with the trilogy format for good.

“I think it [not focusing on trilogies] gives us a more open-ended view of storytelling and doesn’t lock us into this three-act structure. We’re not going to have some finite number and fit it into a box. We’re really going to let the story dictate that.”

Further supporting the idea that trilogies are no longer the focus of the Star Wars universe was the fact that Lucasfilm officially announced two new Star Wars movies — Patty Jenkins’s Star Wars: Rogue Squadron (2023) and Taika Waititi’s untitled project — at Disney’s December 2020 Investor Day event. These two movies are seemingly unrelated — and Marvel Studios boss Kevin Feige’s confirmed Star Wars film also appears to be a standalone job at this time, though nothing has been confirmed.

As it turns out, however, the trilogy format is alive and well in the Star Wars universe — and, it could be argued, it’s actually better than ever before. Thanks to another Investor Day announcement — confirmation of The Mandalorian Season 3 and two interconnected spinoffs, Ahsoka and Rangers of the New Republic — fans of the trilogy format have a lot to look forward to, including more impressive visual effects.

The Mandalorian has already picked up where Return Of The Jedi [the series takes place about five years after Episode VI and Boba Fett’s Sarlacc pit incident] left off, and has proved more popular than many likely deemed possible. The show has expertly shown the introduction of the New Republic, while at the same time dealt with the remnant of the Empire [specifically, Moff Gideon’s (Giancarlo Esposito) Imperial remnant] before it becomes the First Order. It features new, endearing characters, such as Din Djarin and Grogu, whilst also bringing EU characters back into the fold, like Ahsoka Tano [played by Rosario Dawson] and Bo-Katan [Bo-Katan Kryze played by Katee Sackhoff] – and with the recent appearance of Luke Skywalker [CGI Mark Hamill, in this case], it directly connects to the original trilogy

Now, as The Mandalorian saga continues to expand with its two interconnected spinoffs — which are, from what was said at Investor Day, set to air simultaneously — fans get to know all of the characters they’ve come to love, but far more in-depth than they could in a film trilogy.

Ahsoka, for example, is set to follow Star Wars Rebels’ and Star Wars: The Clone Wars’ character Tano’s storyline from The Mandalorian Season 2, Episode 5 (“Chapter 13: The Jedi”) in which she discovers — following a beskar spear vs. white lightsaber battle with Corvus Magistrate Morgan Elsbeth (Diana Lee Inosanto) — that Grand Admiral Thrawn (rumored to be played in live-action by Robert Downey, Jr.) is still alive and, in all likelihood, with Ezra Bridger (rumored to be played in live-action by Star Wars Rebels voice actor Taylor Gray).

Outside of its existence, no details have been released at all regarding Rangers of the New Republic. The presumption, however, is that it will follow New Republic Marshal Cara Dune (Gina Carano) and her adventures on Nevarro. Some have suggested that X-wing pilots Carson Teva (Paul Sun-Hyung Lee) and Trapper Wolf (Dave Filoni) — who appeared in Season 2 on the ice planet featured in “Chapter 10: The Passenger”.

Related: ‘The Mandalorian’ Was the Most Pirated Show of 2020

This ability for showrunner Favreau, executive producer Filoni, and their team of all-star directors to engage in serious character development is a huge part of what makes the streaming series trilogy even better, in many ways, than prior Star Wars trilogies.

Another major perk is the sheer accessibility of the Disney+ streaming platform — people who never would have visited a movie theater to watch a Star Wars feature film may very well turn on The Mandalorian, Ahsoka, or Rangers of the New Republic and find themselves hooked after just one or two episodes.

This certainly happened during the first season of the Star Wars series and, now, people clearly can’t get enough.

There’s even a supplemental spinoff — not officially part of the interconnected Mandalorian trilogy — creator Jon Favreau has confirmed will debut in December 2021.

Fans of Star Wars history — Fett originally appeared in the non-canon Star Wars Holiday Special (1978) and then in both Star Wars: Episode V – The Empire Strikes Back (1980) and the aforementioned Return of the Jedi — already know that The Book of Boba Fett will follow iconic beskar armor-clad bounty hunter Boba Fett (Temuera Morrison) and sharpshooter Fennec Shand (Ming-Na Wen) on Tatooine, one of the most popular planets in the Star Wars galaxy.

What do you think? Is this the perfect marriage of the classic Star Wars trilogy format and Disney’s modern streaming focus? Stay tuned to Inside the Magic for all of the latest details about the upcoming season of The Mandalorian!