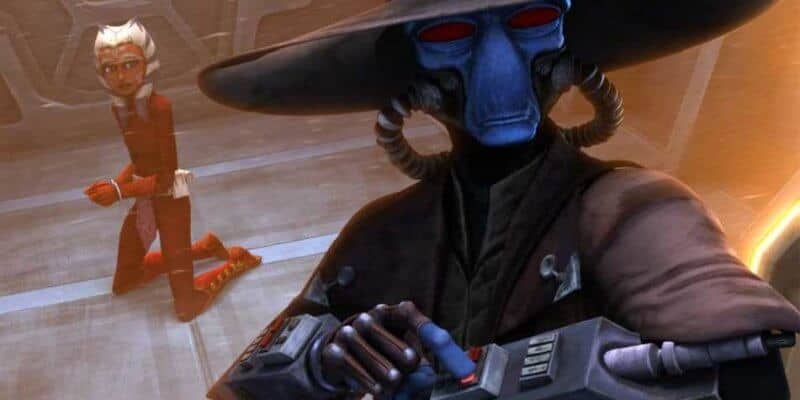 Over the course of The Mandalorian Season 2, several fan-favorite animated Star Wars characters appeared in live-action for the first time.

Star Wars Rebels and Star Wars: The Clone Wars fan-favorites Ahsoka Tano (voiced by Ashley Eckstein/portrayed in live-action by Rosario Dawson) and Bo-Katan Kryze (both voiced by and portrayed in live-action by Katee Sackhoff) both showed up to assist Din Djarin (Pedro Pascal) and Grogu (AKA The Child AKA Baby Yoda) in various episodes of The Mandalorian Season 2, including the epic season finale (“Chapter 16: The Rescue”).

Now, as we gear-up for the first of numerous Mandalorian spinoffs — The Book of Boba Fett, releasing December 2021 — fans are clamoring for another character from Dave Filoni’s Clone Wars to be cast in live-action.

Slashfilm has this to say about bounty hunter Cad Bane, who first appeared in the Star Wars: The Clone Wars Season 1 finale episode (“Hostage Crisis”):

With his big eyes and narrow, long face, Bane offers a very alien-looking alien. This, however, gets offset by his Spaghetti Western influence. Bane wears a wide brim hat and chews on toothpicks. He speaks with a dry, crisp drawl. From his opening moments, Bane steals the screen and demands attention through sheer coolness. If Clint Eastwood were a Star Wars character, this would be him.

That coolness is magnified by the fact that despite not having superpowers or anything, Cad Bane is an incredible bounty hunter, thief, kidnapper, and whatever else people pay him to be. The character repeatedly stands up to the Jedi and walks away unscathed.

Bane is not a crucial character in Clone Wars. As Slashfilm points out, he almost feels nothing more than “interesting side noise” amid a war-torn galaxy. This could, however, be a perfect fit for Mandalorian showrunner Jon Favreau and Dave Filoni’s next chapter, The Book of Boba Fett, which is set to feature Temuera Morrison as the iconic beskar-clad bounty hunter and Ming-Na Wen as sharpshooter Fennec Shand — and, if The Mandalorian Season 2 finale post credits scene is any indication — we’re headed back to Tatooine, where crime syndicates (hi, Jabba the Hutt and Bib Fortuna) have been all the rage for all 40 years of the Skywalker Saga.

Although Bane doesn’t necessarily play a critical role in the overarching story of Clone Wars, he has developed quite a following, with many fans preferring him to other villains in the animated series, like Moralo Eval and even Count Dooku.

All of this sounds like the perfect setting for Bane to make his live-action debut in the Star Wars universe. Star Wars fans agree — let’s take a look at the social media buzz.

So can I finally get that Cade Bane flashback in The Book of Boba Fett or what? #cadbane #bobafett

TheGreekMamba posted a picture of the Star Wars character and wrote:

one character I’d really like to see in any of the upcoming series #CadBane #StarWars pic.twitter.com/wCIQsKjwBl

Meanwhile, Around the Galaxy didn’t beat around the bush, posting:

Who do you want to see brought to live action in #TheBookOfBobaFett and why is it #CadBane?

One of their followers, Matthew Harrington, has even taken it upon himself to cast the role, sharing:

Harris Covington McGrade shared this succinct thought on the subject:

Jon Favreau has previously expressed that he wants Star Wars creatives to listen to the Star Wars fan community — this would be the perfect opportunity for him to continue paying forward the fan service he and Filoni handle with such aplomb.

Another thing that indicates we could see the introduction of Bane sooner rather than later is the fact that a Star Wars The Black Series action figure version of the character is set to release in March 2021 and is perfect for any Star Wars collection.

It’s intriguing that Cad Bane merchandise would be hitting shelves in early 2021, when we are almost certain to begin getting additional casting information about The Book of Boba Fett. Coincidence — or not?

At this time, the only other confirmed Star Wars Disney+ series for 2021 is the animated show, Star Wars: The Bad Batch. The Mandalorian Season 3, Ahsoka, and Rangers of the New Republic do not yet have official release dates.

However, the Star Wars galaxy is set to expand significantly over the next few years, with at least 11 series — including the return of Anakin Skywalker/Darth Vader (Hayden Christensen) in OBI-WAN KENOBI: An Original Series — and three announced feature length movies.

What are your thoughts? Should Cad Bane be in The Book of Boba Fett? Who do you think should play the ruthless bounty hunter?

Comments Off on Fans Beg For Cad Bane, Favreau May Be Answering the Call