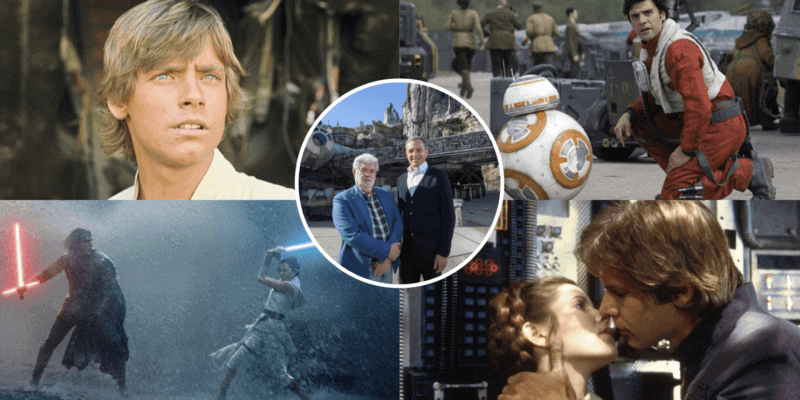 By now, nearly a year after the 40-year-long Skywalker Saga ended with Star Wars: Episode IX – The Rise of Skywalker — which released on December 20, 2019 — fans have had time to develop firm opinions about the sequel trilogy.

While fan opinions of the Star Wars sequel trilogy are mixed, it seems that creator George Lucas would have kept some things exactly the same if he had been at the helm instead of current Lucasfilm President Kathleen Kennedy and The Walt Disney Company.

Now, however, it has come to light that Lucas also had creative differences with the sequel trilogy team. If the creative mind behind the entire Star Wars universe had his way, Darth Maul — certainly not Kylo Ren, Palpatine, and Supreme Leader Snoke — would have been the primary villain in the final Skywalker Saga trilogy.

According to Taschen’s recently released book, Star Wars Archives: Episode 1-3 The Prequels, in Lucas’s own words:

Darth Maul trained a girl, Darth Talon, who was in the comic books, as his apprentice. She was the new Darth Vader, and most of the action was with her. So these were the two main villains of the trilogy [the sequel trilogy]. Maul eventually becomes the godfather of crime in the universe because, as the Empire falls, he takes over.

The movies are about how Leia [Carrie Fisher] — I mean, who else is going to be the leader? — is trying to build the Republic. They still have the apparatus of the Republic but they have to get it under control from the gangsters. That was the main story.

It starts out a few years after Return of the Jedi and we establish pretty quickly that there’s this underworld, there are these offshoot stormtroopers who started their own planets, and that Luke [Mark Hamill] is trying to restart the Jedi.

He puts the word out, so out of 100,000 Jedi, maybe 50 or 100 are left. The Jedi have to grow again from scratch, so Luke has to find two- and three-year-olds and train them. It’ll be 20 years before you have a new generation of Jedi.

By the end of the trilogy Luke would have rebuilt much of the Jedi, and we would have the renewal of the New Republic, with Leia, Senator Organa, becoming the Supreme Chancellor in charge of everything. So she ended up being the Chosen One [to bring peace to the galaxy].

There is a lot to unpack here from a storyline standpoint. From the sounds of things, Lucas would have stuck close to his original characters — though there is, notably, no mention of Han Solo (Harrison Ford) — ultimately following them over a long period of time. This means Rey (Daisy Ridley), Poe Dameron (Oscar Isaac), Finn (John Boyega), and the lovable BB-8 likely would never have existed.

He specifically mentions that it would be two decades between when Luke Skywalker began rebuilding the Jedi and had a new generation of Jedi Knights prepared to carry the torch — or, in this case, lightsaber. From the fact that Lucas also states Luke “would have rebuilt much of the Jedi” by the final film in his version of the sequel trilogy, we can assume there would have been a major time jump at some point.

How this would have worked, even assuming all three core actors were still alive, will, of course, never be known. There are two real options: Lucas would have either had to age Fisher, Hamill, and, presumably, Ford using CGI or make-up or he would have waited years between films.

In regard to the villains, making Darth Maul a bigger part of the Star Wars live-action universe — he did have story arcs in two animated series, Star Wars Rebels and Star Wars: The Clone Wars —  is something fans have long called for. Ray Park played the Sith in the prequel trilogy’s Star Wars: Episode I – The Phantom Menace and would, if reports are true, be open to reprising the character.

As a matter of fact, there have been numerous rumors of a sequel to Solo: A Star Wars Story, in which Maul’s Crimson Dawn crime ring would feature even more heavily than it did in the first Solo movie.

Alden Ehrenreich, who played young Han Solo in the standalone film, has not ruled out a return. It is, however, worth noting that director Ron Howard has said there are no plans for a second film — this could, however, change with Disney’s new focus on streaming. A direct-to-Disney+ Solo sequel could be more appealing financially for the company than a big-budget theatrical release.

As Disney continues to add content to the Star Wars library — in the form of both Disney+ series and movies — it will be interesting to see if any of Lucas’s ideas for a sequel trilogy are utilized in one way or another.

One of the greatest things about the Star Wars franchise is that there are — literally — a galaxy’s worth of stories to tell. From the popularity of The Mandalorian to the classic allure of Lucas’s original trilogy, the Star Wars team is truly limited only by imagination.

What do you think? Do you prefer George Lucas’s sequel trilogy plan or the way J.J. Abrams and his team ended things?