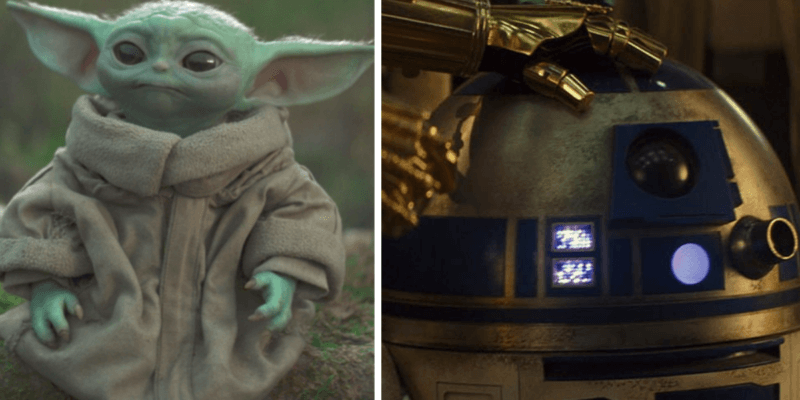 The Mandalorian is undoubtedly the most popular series offered on Disney+. Grogu (AKA Baby Yoda) and Din Djarin (Pedro Pascal) are Star Wars trailblazers in that they have brought longtime fans and brand new converts together, cementing the show as an instant cultural phenomenon.

Season 2 of The Mandalorian ended on a high, yet bittersweet, note with a wide-open future. Now, fans are counting down the seconds until The Mandalorian Season 3 and The Book of Boba Fett are released — both are set for December 2021 premieres.

Since The Mandalorian is set about five years after the events in Star Wars: Episode VI – Return of the Jedi (1983), fans long ago began speculating the inclusion of Star Wars hero Luke Skywalker. At this time, Luke Skywalker was only a few years away from starting a new Jedi Temple and taking in new younglings. Now, Grogu is among the first of his students and will, presumably, become a Padawan and learn the Force’s way during future seasons of The Mandalorian and/or its spinoff series — at this time, Disney and Lucasfilm haven’t confirmed where we will next see The Child.

One theory may explain R2-D2’s reaction — but, remember, this is mere speculation, and we don’t know for sure that Grogu and Luke’s droid companion has ever met previously.

Looking back at the Skywalker Saga Star Wars movies — and even animated shows like Star Wars: The Clone Wars — R2-D2 only ever reacts similarly when he first saw Ashoka Tano in Season 7 of Clone Wars or Leia Organa in the sequel trilogy.

While many fans overlooked the potential meaning behind R2-D2’s joyous hoots and beep upon seeing Din Djarin’s foundling, some Star Wars fans are beginning to connect yet another theory to The Mandalorian.

Star Wars: Episode III – Revenge of the Sith (2005) and The Clone Wars showcased the gruesome death of the Jedi and the rise of the Galactic Empire from Palpatine’s influence over the Clone Wars.

Related: Hasbro’s Darksaber Deemed ‘Most Dangerous’ Toy of the Year

In The Mandalorian Season 2, Episode 5 (Chapter 13: The Jedi), Order 66 survivor Ashoka Tano (Rosario Dawson) revealed to Din Djarin (Pedro Pascal) “Baby Yoda’s” real name — Grogu — and that The Child was present on Coruscant in the Jedi Temple during the fall of the Republic.

Tying that Star Wars information to R2-D2’s overwhelming joy upon seeing Grogu in the final episode of The Mandalorian’s sophomore season has led some to make the connection that, perhaps, the droid saved the baby from the Jedi Temple and hid him from Anakin’s betrayal in Episode III.

Unbeknownst to many, R2D2’s memory was NOT wiped with C-3PO’s after the events in Revenge of the Sith. This means that R2-D2 and Chewbacca are the only beings who have full knowledge of everything that happened at the end of the nine Skywalker Saga films (Star Wars Episodes I-IX).

Twitter user Harri Elmer edited a still from Revenge of the Sith, including Baby Yoda hiding amongst the younglings as Anakin Skywalker ignites his lightsaber.

Though R2-D2’s memory is famously faulty, there’s certainly a chance that the droid recognized Grogu from Coruscant and remembers the young Jedi’s escape from Order 66. R2-D2 has rockets attached to his body in Attack of the Clones and Revenge of the Sith, so Grogu theoretically could have hitched a ride on the droid upon Anakin’s fall.

All of this would explain the droid’s excitement upon seeing the small Jedi in The Mandalorian. It would also explain why Grogu is so hesitant to leave Djarin and go with Skywalker until R2-D2 appears and has a conversation, of sorts, with him.

Jon Favreau and Dave Filoni could now explain Grogu’s rescue and confirm a significant R2-D2 fan theory — Ashoka Tano has previously explained that Grogu has no memory of Order 66, clarifying why the reaction wasn’t mutual. Still, there did seem to be a hint of recognition.

Though this is all a theory, Jon Favreau and Dave Filoni still have a few tricks up their Jedi robes.

Do you think R2-D2 saved Grogu from Order 66? Let us know in the comments below!