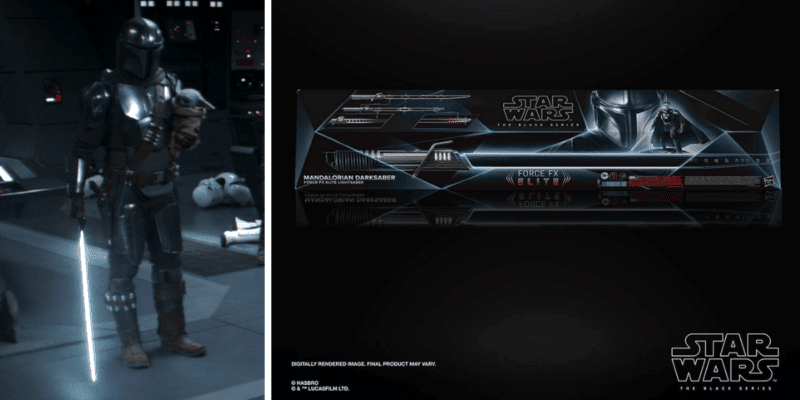 Thanks to Star Wars: Clone Wars, Star Wars: Rebels, and Star Wars: The Mandalorian, more and more Star Wars fans are learning the story of the legendary weapon, the Darksaber. Crafted by Tarre Vizsla–the first Mandalorian Jedi Knight–and now in the possession of Din Djarin (Pedro Pascal) after winning it in combat again Moff Gideon (Giancarlo Esposito), the Darksaber is a unifying symbol which Bo-Katan Kryze (Katee Sackhoff) hopes to use to liberate her home planet.

But, that’s in a galaxy far, far away. Here on Earth, the toy company Hasbro has unveiled the Force FX Elite Darksaber, and it has a worthy story all its own.

Product designer Chris Reiff shared some interesting facts about the toy with StarWars.com.

1. The light-up metal hilt, with a design based on the Darksaber as seen in The Mandalorian, feels just like holding the real thing.

“The feel and weight of the metal hilts is an important part of bringing as much authenticity to the wielder’s experience as possible,” Reiff tells StarWars.com. “We want these high-end products to really help immerse the fans in the experience of carrying and wielding these iconic Star Wars pieces.”

2. The designers also looked to the Darksaber’s animated appearances for inspiration and authenticity.

“Since we haven’t seen it used to its full extent in The Mandalorian,” Reiff says, “looking to those past appearances allowed us to study other aspects of the saber, including the way it sounds and reacts differently than traditional sabers, so we could bring a full and accurate experience to this version.”

3. The Darksaber’s distinctive flat blade and black-and-white color was a welcome new experience for the veteran designer.

“The unique form factor of the Darksaber blade did present some challenges in how to construct it and in how to maximize the edge lighting, as well as the LED type and placement unique to this saber,” Reiff says. “It was a fun process as we researched a number of construction methods and internal geometries for the blade in order to accomplish the design.”

“The new shape of the Darksaber’s hilt and the addition of so many white LEDs led us to another exciting new feature — the inclusion of a rechargeable battery!” Reiff tells StarWars.com.

5. The flat blade is removable, so you can appreciate the unique hilt on its own.

“It makes an excellent display option for the hilt on its own or with the blade installed, letting you display it right alongside all the other Force FX Elite sabers in your collection!” says Reiff.

Related: Hasbro’s Darksaber Deemed ‘Most Dangerous’ Toy of the Year

Hasbro’s FX Darksaber is the latest in a variety of Mandalorian merchandise including a plethora of Baby Yoda (AKA “The Child” AKA Grogu) toys, “The Child” Loungefly Backpack, and a plethora of Funko POP! figurines.

In the hands of Pre Vizsla, leader of the extremist group, Death Watch, the Darksaber was used to kill Duchess Satine Kryze and take over Mandalore. But, Pre’s reign did not last long. Maul soon emerged and challenged Pre for the saber and the throne. He was successful and ruled Mandalore until his old master, Darth Sidious (AKA Sheev Palpatine), intervened.

Fans did not see the Darksaber until a later animated series, Star Wars: Rebels. Kanan Jarrus’s Padawan Ezra Bridger salvaged the Darksaber from Maul’s home on the planet Dathomir —  he gave the ancient weapon to Mandalorian Sabine Wren. It is in this series that we learn the full story of the Darksaber. It was forged by Mandalorian Tarre Vizsla and after being “liberated” from the Jedi Temple, it became a symbol around which all the houses of Mandalore could unite.

Watch the clip below:

After being briefly trained in handling the weapon, Sabine Wren gave the black-bladed saber to Bo-Katan Kryze who she saw best fit to be the new ruler of Mandalore.

The days between that moment in Rebels — just before Star Wars: Episode IV: A New Hope — and the first season finale of The Mandalorian — approximately five years after Episode VI: Return of the Jedi — in which fans saw the Darksaber in the hands of Moff Gideon are somewhat murky. We still don’t know for sure, for example, how Gideon came to steal the saber from Bo-Katan.

The Mandalorian Season 2 ended with Gideon forcing Din Djarin to defeat him, meaning our “Mando” is now the rightful owner and Bo-Katan, presumably, must now fight Din–a friend and comrade instead of an enemy–in order to retake possession.

Luckily, fans will not have to fight a veteran Mandalorian in order to own their own Darksaber, just wait a few more months.

What do you think about the FX Darksaber? Let us know in the comments!