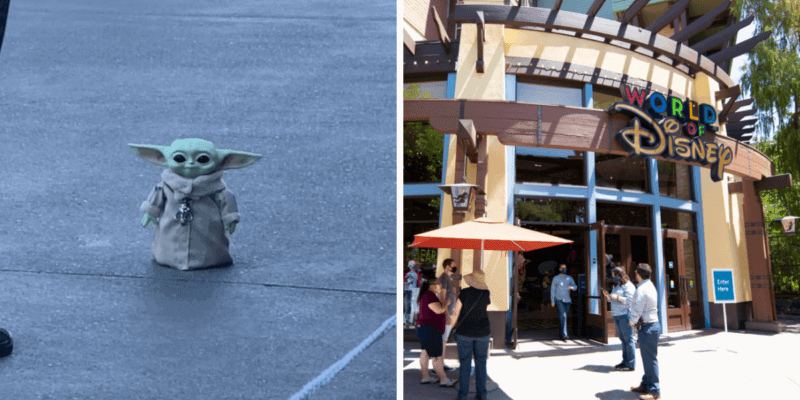 Grogu (AKA “The Child,” AKA “Baby Yoda”) was spotted on the street, saying hi to people passing by. A video of the sighting was uploaded to Instagram by Eeka (@californiadisneyfam).

Related: See Grogu In Your Home Thanks to Amazing New AR Feature!

While we do not know when this video was taken, we can see that Baby Yoda is greeting Guests outside the entrance to Downtown Disney‘s World of Disney Store. A Cast Member is standing close by with what appears to be the remote control, showcasing the foundling around the Downtown Disney District.

This “Baby Yoda” on display is yet another way Disneyland‘s Cast Members are bringing as much magic as possible to Downtown Disney, and fans have commented their excitement.

“Since day one he stole my heart” — @christina_macias

Grogu’s appearance is also the latest in Downtown Disney’s attempt to advertise the latest merchandise in a magical way, following sightings of droid and spider-bots being set outside to greet and interact with the Guests. Similar instances have been spotted at Walt Disney World where Cast Members employ the same kind of magic when selling their droids at Star Wars: Galaxy’s Edge and the Banshees in Pandora at Disney’s Animal Kingdom. Considering Downtown Disney has undergone even more restrictions as California’s new stay-at-home order came into effect, banning food or drink consumption on property, seeing this little green creature roam around is a great way to keep the magic alive.

Season 3 of The Mandalorian is set to premiere on Disney+ around Christmastime 2021.

What do you think about this Grogu toy? Is it on your Christmas list this year? Let us know in the comments!