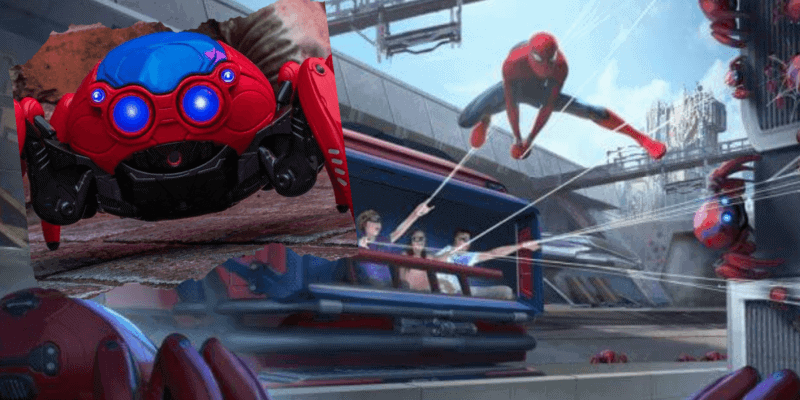 We can’t wait for Avengers Campus to open at Disneyland Resort — and apparently, Disney can’t either! This all-new land will be opening at Disney California Adventure Park in the future. And to get Guests excited, merchandise from the Spider-Man attraction coming soon will be available at Disneyland Resort starting next week!

Here are all the details. From November 30 through December 3, Disneyland Resort’s Downtown Disney District is hosting a limited-quantity pre-sale event for the Spider-Bots, a new Super Hero invention. The Spider-Bots will play a huge role in the Worldwide Engineering Brigade (WEB) new attraction: WEB SLINGERS: A Spider-Man Adventure.

Guests interested in the pre-sale event for purchasing a Spider-Bot at Disneyland Resort — ahead of the grand opening of Avengers Campus — should stay tuned to the Disneyland Annual Passholders Facebook page starting November 25. After the pre-sale event, the Spider-Bots will be available at other retail locations in Downtown Disney starting December 4.

Here’s what Disney has to say about the Spider-Bots from WEB:

As revealed at the D23 Expo last year, The Worldwide Engineering Brigade or as the kids call it, WEB, is devoted to empowering the next generation of heroes with cutting edge technologies – like Spider-Bots. While we look forward to inviting you to our WEB open house in the future, for now, you can get your hands on your very own Spider-Bot!

Spider-Bots and the latest WEB apparel from Avengers Campus will be available in the Downtown Disney District at Disneyland Resort, at both World of Disney and Disneyland Resort Backlot Premiere Shop beginning Dec. 4.

Every Super Hero needs a friendly sidekick to help protect their neighborhood. These Spider-Bots put you in control of the action to battle opponents with programmed combat and defensive abilities. They can crawl backward and forward, crouch, spin 360°, stare down with their laser eyes, attack opponent Spider-Bots and even blast off their shields. Check out the video below to learn how you can swing into action with your very own Spider-Bot.

By the looks of it, these interactive toys seem to be the Avengers Campus version of the droids in Star Wars: Galaxy’s Edge. It’s clear that Disney is continuing to introduce merchandise that elevates the Guest experience. We can’t wait to see what these Spider-Bots can to in the new attraction at Avengers Campus once the land opens at Disney California Adventure.

You can read more details on the all-new Spider-Man attraction at Avengers Campus — WEB SLINGERS: A Spider-Man Adventure — in our guide here.

An opening date for Avengers Campus has not yet been announced, but this news sure is exciting! Subscribe to our newsletter below for the latest information on Avengers Campus, Disneyland Resort operations, and more.