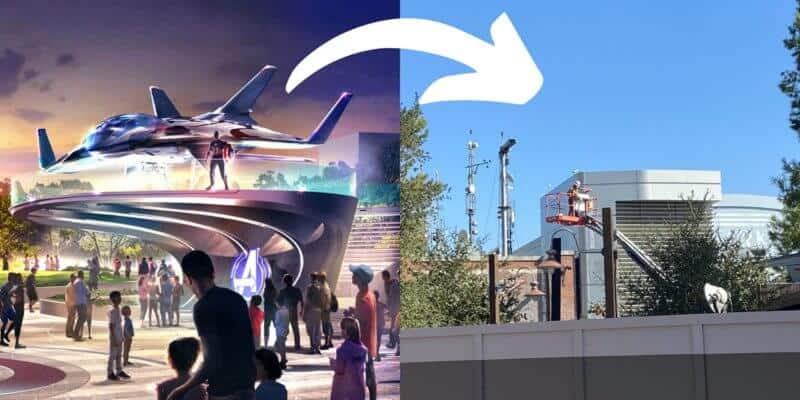 Avengers Campus has been a highly anticipated land for many Marvel and Disney fans, and now we are able to catch a glimpse inside of what the Imagineers are working on inside!

Avengers Campus was meant to open back in July, however, due to the pandemic forcing Disneyland Resort to close for the past 8 months and putting construction to a temporary halt, it was delayed. But with Buena Vista Street partially opening up to Guests today, we now have a closer look at the construction that has been underway at Disneyland Resort.

As you can see below, the Avengers Campus buildings continue to have work being done, just past the construction walls.

Although we can still see Imagineers are hard at work, the buildings are looking nearly complete in the Marvel Universe. Hopefully, this just means some final touches are going into Avengers Campus and we will get to go inside once Disneyland reopens.

At the 2020 IAAPA expo, we recently were able to see that the ride vehicles for WEB-SLINGERS: A Spider-Man Adventure were ready and moving. Having Avengers Campus be a heavily showcased part of the expo also shows that Disney could be ready for its debut. Although Disney did not actually say this, it is unlikely they would be promoting a land as an upcoming adventure if Guests would not be able to access it soon. Inside the Magic will keep you updated as Disney makes official statements regarding Avengers Campus.

When will Avengers Campus open at Disneyland?

As we discussed, Avengers Campus at Disneyland is one of the most anticipated new additions to Disneyland, and with the pushed back opening date, many Guests are wondering when that new date will be.

The Campus cannot officially open until the Disneyland theme parks do, and unfortunately, Governor Newsom’s theme park reopening guidelines will likely not prohibit Disneyland to reopen until summer 2021, or possibly later. Orange County would need to be in Tier 4 for California theme parks to open to a very restricted guideline, but the county has just recently taken a few steps back from Tier 2 to Tier 1.

But for now, until Disneyland Resort reopens and Avengers Campus brings the MCU to life, stay tuned to ITM as we continue to find all the latest updates on the new land.

Do you think Avengers Campus will open soon?

Comments Off on DCA Guests Get Sneak Peek of Avengers Campus!