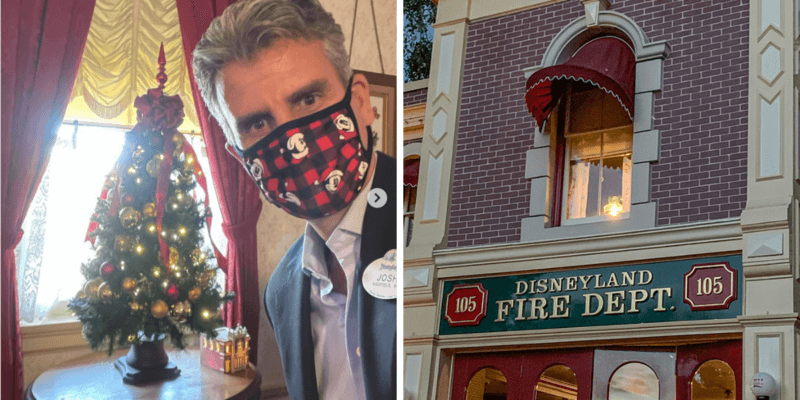 There are only six more days until Christmas, and the thoroughfares of Disneyland Park sit empty, save for one man. Chairman of Disney Parks, Experiences and Products Josh D’Amaro made his way back to the theme park and into Walt Disney’s in-park apartment above the Fire Station on Town Square.

Just in front of the small window that normally looks out onto a relatively-unsuspecting public, D’Amaro found a small Christmas tree, and he took the opportunity to send the following message to Disney fans longing to be back in the Happiest Place on Earth.

“Stopped into the Disneyland Resort this week and was delighted to see the Resort Enhancement team had installed the tree in Walt’s Apartment — we always leave a light on for him. I had to share since I know you won’t be able to see it this year. Be safe everyone. Happy Holidays!”

Josh D’Amaro’s post follows just two days after D’Amaro, who was formerly President of both Disneyland Resort and Walt Disney World Resort, was spotted at the Downtown Disney District and Buena Vista Street greeting Guests and Cast Members, trying to soak up as much Disney magic as they possibly could from the limited shopping that is able to remain open.

At this time, all on-site dining has been suspended amid Governor Gavin Newsom’s regional stay-at-home order. Any food or drink purchased on Disneyland Resort property must be consumed off-site at this time.

This is not the first time D’Amaro has taken part in such person-to-person interactions. Throughout this year–especially after the announcement that tens of thousands of Disneyland and Disney World Cast Members were going to be laid off–D’Amaro could be seen taking to the streets of Walt Disney World theme parks as well as Downtown Disney greeting Guests and comforting Cast Members, personally answering any questions they might have. He has also been using his social media to give fans special inside looks at Disneyland Park and Disney California Adventure during the closure, including special looks at the upcoming Marvel-themed land, Avengers Campus.

At this time, it is still unclear when the theme parks and hotels at the Disneyland Resort will be reopened.

Want to plan your next Disneyland Resort Vacation? Click here to get started!

How do you think Josh D’Amaro has done this year as Disney Parks Chairman? Let us know in the comments!