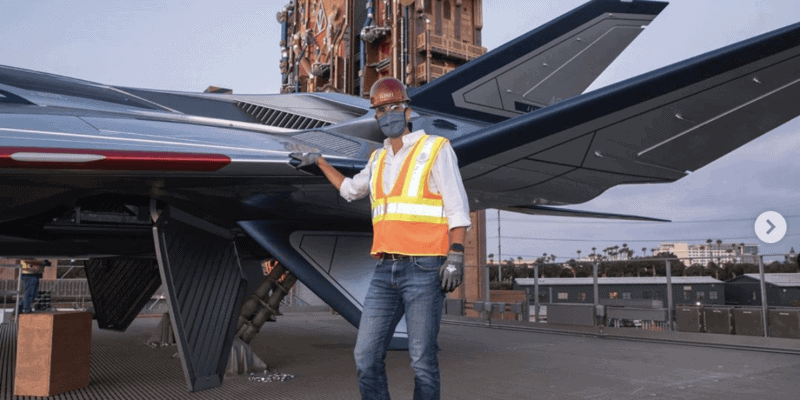 When the opening date of Disneyland Resort’s new Avengers Campus area was pushed back earlier this year, Marvel fans were understandably disappointed.

Now, Walt Disney Company Chairman of Disney Parks, Experiences and Products Josh D’Amaro has given his social media followers a first look at the progress that is being made on Avengers Campus, which was first announced at the 2019 D23 Expo.

Took a tour of Avengers Campus with @kenpotrock Kevin Feige and @waltdisneyimagineering the other day when the Quinjet landed right in front of us. #AvengersCampus

Avengers Campus with @kenpotrock Kevin Feige and @waltdisneyimagineering the other day when the Quinjet landed right in front of us. #AvengersCampus

The photos D’Amaro shared give a small glimpse of what is to come in the immersive Marvel-themed land that will feature the first ever Disney theme park Spider-Man attraction, WEB SLINGERS: A Spider-Man Adventure.

The new Disney California Adventure expansion is sure to be visually stunning with Guardians of the Galaxy: Mission Breakout (formerly The Twilight Zone Tower of Terror) looming in the background.

In a recent statement, Disney did not share a new opening date for Avengers Campus, but did comment that construction is moving forward:

“Avengers Campus invites you to team up with the Avengers and their allies in a fully immersive land at Disney California Adventure park. Avengers Campus is comprised of several heroic locations—each hosted by a different Super Hero or their ally—to share their unique powers, technology and knowledge with recruits,” according to Disney’s official description of the land.

What do you think about Josh D’Amaro’s first look at Avengers Campus at Disneyland? Which Avenger are you most looking forward to seeing in the new Disney California Adventure Park Marvel land?

If you want to visit a Disney park for yourself soon, contact the Academy Travel team for assistance. Their Disney experts will make sure you have your dream vacation, whether you want to spend time at Star Wars: Galaxy’s Edge or Fantasyland is more your style.