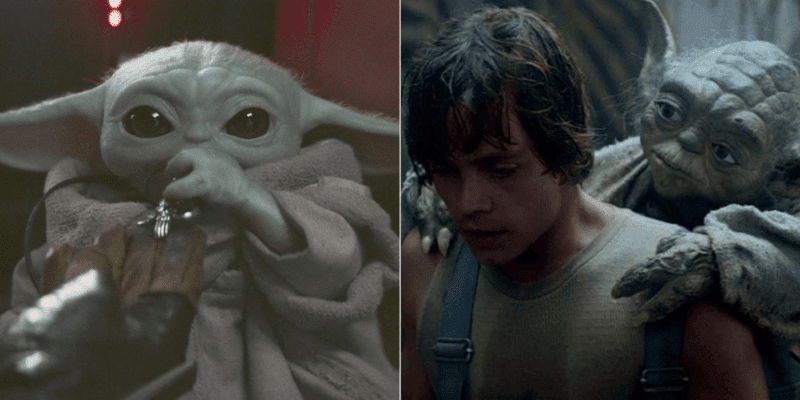 Dagobah — a seemingly unassuming swamp and forest planet that was extremely strong with the Force — holds a special place in many Star Wars fans’ hearts.

It’s no surprise, then, that Mandalorian creator Jon Favreau and executive producer Dave Filoni might consider a return to the famous Star Wars planet in the upcoming Season 3 of The Mandalorian or one of its spinoffs. The duo has mastered the art of fan service, bringing to life — or, back to life in the case of bounty hunter Boba Fett (now played by Temuera Morrison) — fan-favorite animated characters like Ahsoka Tano (Rosario Dawson) and Bo-Katan Kryze (Katee Sackhoff).

How, though, could this happen? The answer lies in the Star Wars Legends Thrawn Trilogy by Timothy Zahn — Heir to the Empire, Dark Force Rising, and The Last Command.

In this trio of novels, Luke Skywalker, Han Solo, and Princess Leia deal with the Imperial remnant in a series of adventures and misadventures.

Since Skywalker was already re-introduced as Grogu’s (AKA The Child AKA Baby Yoda) new Jedi Master in The Mandalorian Season 2 finale episode, it serves to reason that he will somehow show back up in The Mandalorian or a spinoff show. This hasn’t been confirmed by Favreau and Filoni, but it seems highly likely.

Inverse pointed out one way this could happen — and it involves both Dagobah and the rumored introduction of Mara Jade to the current Star Wars canon:

…the first book in the trilogy, Heir to the Empire, followed Luke back to DAGOBAH. This location is a no-brainer for The Mandalorian. If you were Luke and had just seen your master die on a planet where he’s lived for decades, then stumbled upon another powerful Jedi padawan of the same species, you’d want to take him to the same place.

Part of Dagobah that Heir to the Empire dwells on is the Cave of Evil, a cave full of Dark Side energy that Yoda used to neutralize his Jedi disturbance in the Force in order to hide him. It famously served as the cause of Luke’s vision of fighting Vader in Empire Strikes Back. While on Dagobah, Luke entered the cave and had a vision involving Mara Jade and the Sarlacc pit. He also found a strange beacon.

We already know that The Mandalorian saga — most likely by way of spinoff series, Ahsoka — is probably going to follow Tano’s search for Grand Admiral Thrawn (voiced by Lars Mikkelsen in Star Wars Rebels) and fellow Jedi Ezra Bridger (voiced by Taylor Gray in Rebels).

Thus, it isn’t too much of a jump to presume that the Thrawn Trilogy could be used as a basis for some of the events that occur in Favreau and Filoni’s corner of the Star Wars universe moving forward.

Furthermore, as Inverse shared, the reappearance of Dagobah in the Star Wars franchise could lead to at least one more Expanded Universe character becoming canon:

…this beacon could be the key to more non-canon characters being brought into the fold. The beacon was placed there by Jorj Car’das, a Corellian smuggler who was brought to Dagobah years earlier.

At this time, The Mandalorian Season 3 and Ahsoka do not have official release dates. The next confirmed Star Wars shows that will air on Disney+ are The Book of Boba Fett and the animated series Star Wars: The Bad Batch.

The Star Wars galaxy is ever-growing, thanks in large part to Emmy-winning The Mandalorian‘s unlikely beskar armor-clad hero. With four Mandalorian-centric TV shows — The Mandalorian Season 3, The Book of Boba Fett, Rangers of the New Republic, and Ahsoka — coming down the pipeline, it’s an exciting time for the Star Wars story.

What do you think? Could we return to the original trilogy’s Dagobah in the new season of The Mandalorian as the Star Wars saga continues?