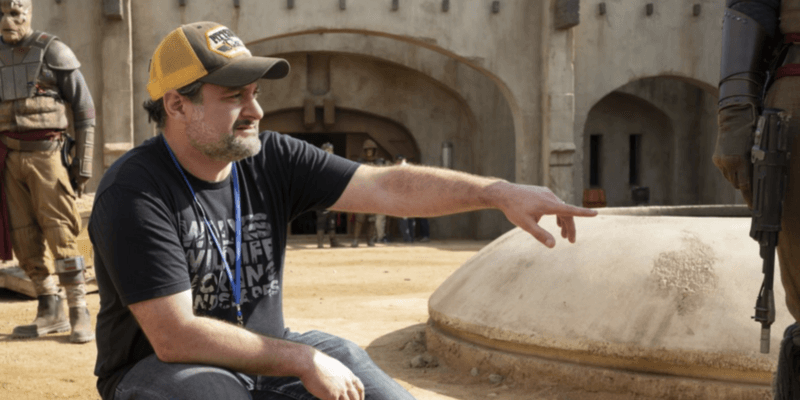 Sam Hargrave — a stunt coordinator, stuntman, and director — is known for his work on The Mandalorian, Extraction (2020), Avengers: Endgame (2019), Atomic Blonde (2017), Captain America: Civil War (2016), and more. He has been especially heavily involved in additional Marvel Cinematic Universe films, even serving as the stuntman for Chris Evans.

Recently, Hargrave — who is set to begin filming Extraction 2 with Chris Hemsworth in the fall — sat down with Collider to talk all things Mandalorian Season 2. While the second-unit director didn’t give much insight into what Star Wars fans can expect in the upcoming third season of Jon Favreau and Dave Filoni’s hit Disney+ series, he did spend some time sharing exactly how The Mandalorian team makes cinematic-level magic come to the small screen.

Hargrave explained what, exactly, it means that The Mandalorian has two units working at all times:

“The main unit stays with the main story or the main cast…and then there’s either where you have a lot of stunt performers and you don’t need a lot of the cast, second unit comes in and can knock off a lot of important work for the movie, or feature, or series. Or, sometimes you run off to Hawaii to get plate shots or run down to wherever and get things that they need to tie all the pieces together.”

“So for something this big and so many moving parts and such a short timespan…what I think the’ve done amazingly is kind of feature-film level, um, TV. There’s such a short turnover in television. You know, you only get a certain amount of time to shoot these episodes, maybe seven to ten days. So, to get the level of excellence they’re looking for, it’s helpful to have two units going at the same time because you’re getting twice the work.

I was heavily involved with the second season, doing basically whatever they needed me to do.”

Hargrave then talked turkey, so to speak, sharing details about Star Wars creator, George Lucas, visiting the Mandalorian set while Season 2 was filming. On January 16 of last year, showrunner Favreau shared the following picture of Lucas holding Grogu (AKA The Child AKA Baby Yoda) on Twitter.

The Star Wars fan base, of course, went wild on social media when Favreau posted the photograph and it seems like the team on-set was nearly as starstruck as the rest of us.

Hargrave acknowledged that having Lucas come to the set was akin to Grand Master Yoda visiting. When asked if he wanted to stop Lucas for a photo, he said:

“…[of course] I wanted to [take a picture with George Lucas]….the fanboy wants to stop everything you’re doing and go ‘Oh my gosh, I’m gonna wait in line if it takes an hour to get a picture.’”

Hargrave also quipped, though, that he wasn’t being paid to “socialize” — not even with George Lucas himself — and went on to share that he wanted Lucas to be able to fully appreciate what the Star Wars universe has become:

“He [Lucas] just wants to come see the fruit of his labors of 30, 40 years ago….I’m like let him enjoy it. As huge as it is for us to see him there, it’s gotta be an amazing moment for him to see that this idea he had back in the ‘70s was still…like is surging in popularity and going strong and this is something that, this is his baby, that’s grown into a whole extended family that he should be totally proud of, so I wanted to let him soak that up.”

Hargrave then went on to talk about a fan-favorite character who Lucas created alongside Mandalorian executive producer Dave Filoni — the duo worked together to craft Anakin Skywalker’s Padawan Ahsoka Tano (voiced by Ashley Eckstein) for Star Wars: The Clone Wars.

In animated form, Tano also appeared in Star Wars Rebels, where the Grand Admiral Thrawn (voiced by Lars Mikkelsen) storyline we are likely to see play out in upcoming Mandalorian spinoff, Ahsoka, was first introduced. Although casting for Thrawn in live-action has not been confirmed, rumors are swirling that Iron Man star Robert Downey, Jr. could take-on the role.

Hargrave shared these details about Filoni bringing his beloved Star Wars character to life in The Mandalorian Season 2, Episode 5 (“Chapter 13: The Jedi”):

“Rosario’s an amazing performer, you know, even when she’s done up in her Star Wars getup. Doing my research for the second season, I had watched Clone Wars, the animated series, that Dave Filoni had written and directed a lot of those episodes. So to see Dave…Dave Filoni wrote and directed that episode that she was in…that character was very near and dear to his heart, so to see his effort and detail…dedicated time spent working with Rosario, working with everyone to make every frame a masterpiece was really fun.

He was stressed, he was like pulling his hair out ….he was so committed to that style, you know, his choice, kind of that Samurai movie style, from opening Fram to closing frame and he stuck to it and did such a unique look and feel.

Hats off to Dave and Rosario, for bringing that character to life.”

“Because it is lighting up across her [Tano/Dawson] face…the props department made some amazing lightsabers.

It’s the difference between having a rubber gun onset and having like a blank firing gun….it changes… the level of power you feel.

The fights, they were making contact with those things…you could actually feel the connection, you could see the light reflecting in their eyes. It really made it seem as though you were in the scene and it helped the actors draw energy, it helped the crew get excited.”

We don’t know about you, but thinking back to everything that happened in the second season of The Mandalorian — from Din Djarin (Pedro Pascal) removing his beskar armor helmet not once, but twice, to the return of original trilogy bounty hunter Boba Fett (Temuera Morrison), to Luke Skywalker (CGI Mark Hamill) rescuing Grogu from Moff Gideon’s (Giancarlo Esposito) Dark Trooper squadron — has us excited for everything that is to come in Season 3!

Get fired up for the new season and watch the full 30-minute, behind-the-scenes Mandalorian Season 2 interview with Sam Hargrave below:

Where do you think showrunner John Favreau’s corner of the Star Wars universe is headed next?