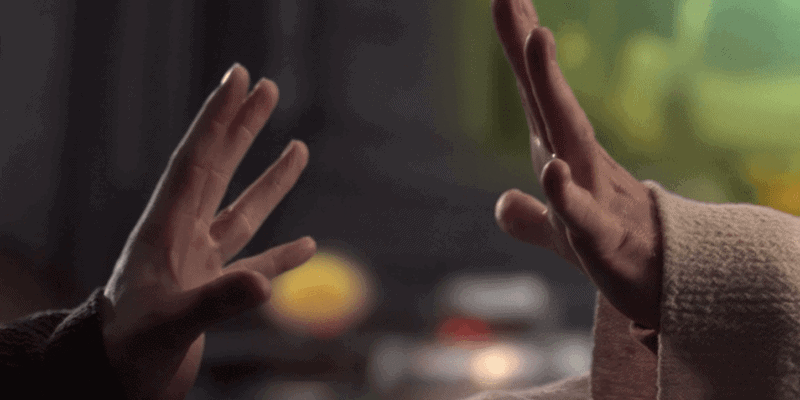 For 40 years — via nine Skywalker Saga movies, countless novels within the current Star Wars canon, and television series like Star Wars Rebels, Star Wars: The Clone Wars, and The Mandalorian — the Force has held together a galaxy far, far away, striking balance between the light side and the dark side.

Related: Rosario Dawson Calls Getting Cast as Ahsoka “the Force at Work”

Long-time Star Wars fans were first introduced to the Force in Star Wars: A New Hope (1977) — it wasn’t Episode IV until much later, when the first prequel film, Star Wars: Episode I – The Phantom Menace (1999) released.

In the George Lucas Star Wars movie that started it all, Jedi Master Ben Obi-Wan Kenobi (Alec Guinness) tells Luke Skywalker (Mark Hamill), “It’s [the Force] an energy field created by all living things. It surrounds us and penetrates us; it binds the galaxy together.”

Since then, the Force has been used to do everything from pull Luke’s X-wing out of a Dagobah swamp in Star Wars: Episode V – The Empire Strikes Back (1980), to ire Han Solo (Harrison Ford) time and time again, to connect Rey (Daisy Ridley) and Kylo Ren/Ben Solo (Adam Driver) through a rare — and controversial — Force dyad in the sequel trilogy (Star Wars: Episode VII – The Force Awakens (2015), Star Wars: Episode VIII – The Last Jedi (2017), and Star Wars: Episode IX – The Rise of Skywalker (2019)), and to add dramatic flair to Mace Windu (Samuel L. Jackson) and Sheev Palpatine’s (Ian McDiarmid) prequel trilogy battle via Force lightning.

Now, for the very first time, Star Wars has revealed what the Force looks like to a Jedi, with incredible results. The depiction appears in the new comic issue Marvel’s Star Wars: The High Republic #1, by Cavan Scott and Ario Anindito.

The tale introduces fans to brand new High Republic characters, including Padawan Keeve Trennis, who is shown in the amazing drawing. Remember, the High Republic era is about 200 years before The Phantom Menace, during the golden age of the Jedi Order.

During this age, the apex of the Jedi, Jedi Knights were revered and beloved — and had a stronger connection to the Force than we’ve ever seen before in the Star Wars universe.

According to ScreenRant’s coverage of this exciting new comic artwork:

The image is absolutely beautiful and unlike anything ever seen before in Star Wars. This is a time well before the Force lost balance and the shroud of the dark side fell across the galaxy, and consequently, the Jedi had a closer relationship with the Force than in the main Skywalker saga. Trennis’ feat is impressive, because she begins by connecting with the Ridadi, identifies the signal they are now following, and traces it to its source. Notice her perception of Starlight Beacon, which is almost wraith-like, fitting with the fact it is an artificial construct and thus not so luminous in the Force.

The whole scene is absolutely stunning. It’s fascinating to see how Keeve Trennis perceives the Force; the eddies and swirls of color and power that surround her, the spectral visions of the artificial environment that is Starlight Beacon. While there have been scenes like this in the various Star Wars novels, the advantage of comics is that they are a visual medium…

Although we are almost certain to be seeing some of Star Wars most iconic Force-sensitive characters — including Grogu (AKA The Child AKA Baby Yoda), Luke Skywalker (possibly as a Force Ghost/possibly CGI Mark Hamill/possibly Sebastian Stan), Ahsoka Tano (Rosario Dawson), Darth Vader/Anakin Skywalker (Hayden Christensen), and Obi-Wan Kenobi (Ewan McGregor) — in The Mandalorian saga, including spinoff Ahsoka, and OBI-WAN KENOBI: An Original Series on Disney+, the High Republic is, perhaps, the biggest test Star Wars has ever faced.

Other than Leslye Headland’s (Netflix’s Russian Doll) upcoming dark mystery show, The Acolyte, The High Republic is — at least so far — squarely a publishing initiative. It will be interesting to see if Lucasfilm is able to draw-in newer Star Wars fans who were mostly drawn in by The Mandalorian’s Grogu and his bounty hunter protector, Din Djarin (Pedro Pascal).

The fact that Master Yoda — a familiar and beloved character — is alive during the High Republic age will help, but, still, Lucasfilm’s marketing of the initiative will be key as they attempt to convert more casual fans to readers of printed Star Wars media.

If High Republic is successful, it could lead to even more expansion of the Star Wars galaxy — many are hoping the recently released fan art rendering of actor Keanu Reeves as Darth Revan becomes a reality in an Old Republic series or Star Wars movie at some point.

It’s an exciting time to be a Star Wars fan, as the Star Wars franchise is rapidly expanding into new and exciting eras exploring both the dark side and the light side of the Force.

What are your thoughts? Are you excited to see what the Force looks like to a Jedi for the very first time? Is it what you imagined?