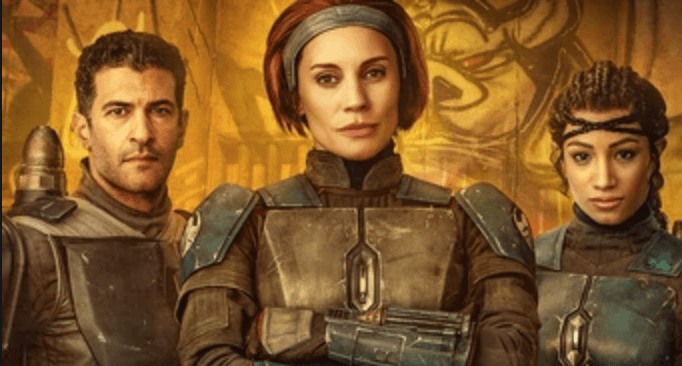 Bo-Katan Kryze actress Katee Sackhoff — also known for her role as Kara ‘Starbuck’ Thrace in Battlestar Galactica — recently sat down with YouTube’s The Sith Council to talk all things Mandalorian.

Sackhoff made her live-action debut as Kryze in Bryce Dallas Howard’s The Mandalorian Season 2, Episode 3 (“Chapter 11: The Heiress”). She and two of her Nite Owl warriors — Koska Reeves (Mercedes Varnado/Sasha Banks) and Axe Woves (Simon Kassianides) — met titular Mandalorian Din Djarin (Pedro Pascal) on his quest to deliver Grogu (AKA The Child AKA Baby Yoda) to the Jedi Order.

Strangely missing from the finale episode, however, was Mandalorian warrior Axe Woves.

Sackhoff cleared up some of the confusion regarding Woves’s MIA status during her Sith Council interview. The actress said:

Even though Sackhoff didn’t share extensive details about why Woves was suspiciously missing from the final episode of The Mandalorian Season 2, there are several implications what she shared.

First, we can assume that Woves will be back in some fashion, either in The Mandalorian Season 3 or one of the show’s three confirmed spinoff series. Secondarily, it seems like that, if the Nite Owls are back, Bo-Katan Kryze will be, too.

While Sackhoff’s involvement in the upcoming third season of The Mandalorian hasn’t been officially announced, most fans have been working under the assumption that the actress will be back to finish the Darksaber storyline that was left unresolved in the December 18 season finale. Bo-Katan’s story, it would certainly seem, is not over.

Mandalorian creator Jon Favreau and executive producer Dave Filoni haven’t shared a release date for The Mandalorian Season 3 or two of its spinoffs, Ahsoka and Rangers of the New Republic. Favreau did, however, confirm that the third spinoff, The Book of Boba Fett, will debut in December 2021 and will serve as “the next chapter” of the Mandalorian saga within the Star Wars universe.

As the Mandalorian’s story continues, fans can anticipate that more animated series Star Wars Rebels and Star Wars: The Clone Wars characters will make their live-action debuts, just like Kryze and Tano did during the second season.

Can you believe the pop culture sensation The Mandalorian has become?

Comments Off on Katee Sackhoff Says Axe Woves Was MIA For “A Reason”, Promises His Return