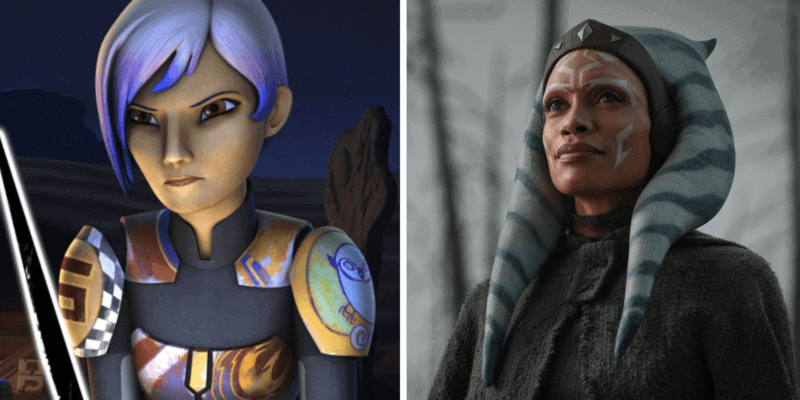 Then, Anakin Skywalker’s Padawan Ahsoka Tano (voiced by Ashley Eckstein/played in live-action by Rosario Dawson) — a fan favorite from both Star Wars animated shows — appeared in live-action for the first time in The Mandalorian Season 2, Episode 5 (“Chapter 13: The Jedi”).

Although the Star Wars: The Clone Wars and Star Wars Rebels character only appeared in a single episode of the second season of The Mandalorian, she played a major role. Tano — via a Jedi mind connection with Force-sensitive Grogu (AKA The Child AKA Baby Yoda) — finally revealed the tiny youngling’s real name and backstory to beskar armor-clad bounty hunter hero Din Djarin (Pedro Pascal).

Before the end of the Tano-centric episode, another animated character — Rebels villain Grand Admiral Thrawn (voiced by Lars Mikkelsen/rumored to be played in live-action by Robert Downey, Jr.) — was teased by Corvus Magistrate Morgan Elsbeth (Diana Lee Inosanto), who claimed he was acting as her master.

Now, it seems that Dawson herself may have confirmed that another Star Wars animated character is about to make her live-action debut.

According to CBS-owned ComicBook.com:

“Guys…,” @starwarstuff tweeted. The account shared a screenshot that shows Dawson liking a tweet that reads, “Sabine Wren will reportedly be making her live-action debut in AHSOKA, and co-starring alongside Ahsoka Tano.” You can check out the tweet below:

This report — which Dawson apparently at least supports, if she isn’t confirming the news — plays into a previous fan theory that we’ve actually already seen Sabine Wren (voiced by Tiya Sircar) during the second season of The Mandalorian.

Remember, nothing has been officially confirmed by Lucasfilm or Disney at this time, but it certainly tracks that Wren will appear somewhere in The Mandalorian Season 3 or one of its spinoffs — Ahsoka, Rangers of the New Republic, and The Book of Boba Fett.

Ahsoka does, however, seem to be an incredibly likely landing place for Sabine Wren within the Star Wars franchise at this time. Rangers of the New Republic is expected to follow Cara Dune (Gina Carano), although the story has not been officially confirmed.

The Book of Boba Fett, meanwhile, will follow original trilogy bounty hunter Boba Fett (Temuera Morrison) and Fennec Shand (Ming-Na Wen) as they navigate the criminal underworld on Tatooine — there have even been unconfirmed rumors of a Han Solo cameo, perhaps using the same CGI de-aging technology on Harrison Ford that was used on Mark Hamill in the Mandalorian Season 2 finale.

Per our previous coverage of how Wren fits into The Mandalorian’s story arc:

In Star Wars Rebels season 3, Sabine Wren discovers the Darksaber among a collection of Darth Maul’s possessions on Dathomir. Previously in Clone Wars, the former Sith won the blade in a duel with Pre Vizsla, the leader of Death Watch. Sabine trains with the Darksaber, hoping to use it as a symbol to rally the various Mandalorian clans against the Empire’s occupation. But upon returning to Mandalore, her mother, Ursa Wren, tells Sabine she cannot truly lay claim to the Darksaber unless she wins it in combat. Later on, Sabine manages to do just that when she fights Gar Saxon, the Empire’s installed ruler of Mandalore. Yet, though Sabine rightfully wins possession of the Darksaber, she chooses to instead find a leader who will unite Mandalore against the Empire, not believing herself destined for the task. Sabine goes on to present Bo-Katan with the Darksaber in Rebels season 4, and the response from the gathered Mandalorians certainly suggests she is its new master.

There have also been rumors that another popular Jedi character, Rebels’ Ezra Bridger (voiced by Taylor Gray), and Ghost crew members from Hera Syndulla’s (voiced by Vanessa Marshall) The Ghost ship will be brought to life in Mandalorian spinoffs.

What do you think? Are we about to meet Sabine Wren in live-action?