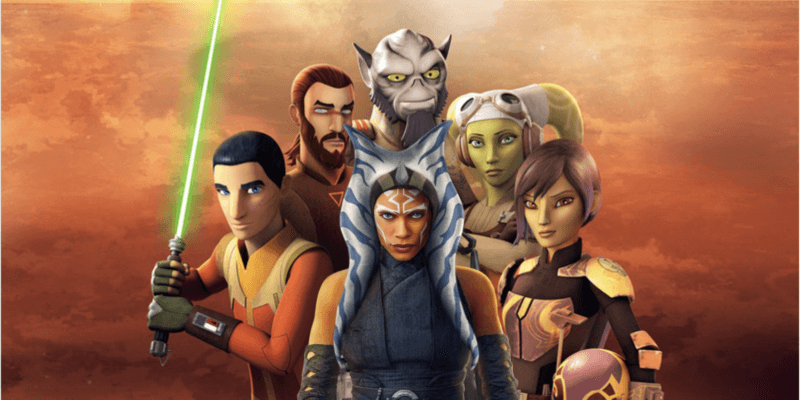 Rebels executive producer Dave Filoni has gone on to work with Mandalorian creator and showrunner Jon Favreau on both seasons of the hit Disney+ series that features the galactic adventures of bounty hunter Din Djarin (Pedro Pascal) and Grogu (AKA The Child AKA Baby Yoda).

The series has also introduced several Star Wars Rebels and Star Wars: The Clone Wars characters and plot points — including Anakin Skywalker’s Jedi Padawan Ahsoka Tano, Mandalorian Bo-Katan Kryze, and the Darksaber — in live-action for the very first time, delighting fans. In fact, “fan service” has arguably never been done as well as it has been in The Mandalorian saga thus far.

Now, a new report indicates that an animated Rebels sequel was actually in the works — and had gotten as far as some voice work being done — before being scrapped in favor a live-action series in the form of Mandalorian spinoff, Ahsoka:

“From what we’ve heard, Jon [Mandalorian showrunner and creator Jon Favreau] has successfully convinced Filoni [Mandalorian executive producer Dave Filoni] to tell the next chapter of Ahsoka’s journey specifically in a tie-in with Rebels in live-action. The next part of the journey is going to be told that way.”

“Basically, the Rebels sequel was already in production, even eyeing a November 2020 release date; Taylor Gray even recorded lines for Ezra Bridger, but after the success of The Mandalorian, that’s where Jon was like ‘Okay, we can bring these characters into live-action and tell the story this way.”

The Mandalorian Season 2 already tied Rebels to Ahsoka Tano’s storyline in Episode 5, “Chapter 13: The Jedi”. When Tano ultimately defeated Corvus Magistrate Morgan Elsbeth (Diana Lee Inosanto) and learned that none other than Grand Admiral Thrawn (voiced by Lars Mikkelsen) is acting as her master.

This perfectly sets up a Rebels sequel that sees Tano searching the galaxy for Thrawn — rumored to be played in live-action by Marvel Cinematic Universe star, Robert Downey, Jr. — and fellow Jedi Knight Ezra Bridger, who voice actor Gray could potentially portray in live-action.

Since this is the presumed storyline of Mandalorian spinoff, Ahsoka, the details of the report track with what we know so far about Favreau and Filoni’s expansion of the Mandalorian saga.

Furthermore, Temuera Morrison has reportedly been tapped to play Rebels’ Commander Cody character in the live-action OBI-WAN KENOBI: An Original Series, so there is another connection that could potentially be drawn upon for a new sequel series.

It does, however, lead to questions about what the “epic” streaming event featuring the culmination of the storylines of The Mandalorian Season 3, Ahsoka, and — another Mandalorian spinoff — Rangers of the New Republic will be.

Rangers of the New Republic is likely to feature Gina Carano’s Cara Dune as a New Republic Marshal on Nevarro, but this has not been officially confirmed.

Some previously thought Filoni was working-up to some sort of live-action Star Wars: The Clone Wars event, but if this new report is true, it could likely be the ending an animated Rebels sequel series would have had — intriguing, indeed.

A third Mandalorian spinoff series — The Book of Boba Fett featuring the previously mentioned Temuera Morrison as iconic bounty hunter Boba Fett — has also been confirmed by Lucasfilm. It is not known, however, if this will connect to the other trio of series, which effectively form a new Star Wars trilogy, or if it will stand on its own and connect to the larger Star Wars universe within the newly updated Star Wars timeline.

In all likelihood, The Book of Boba Fett — rumored to be a miniseries — will not play a role in the interconnected nature of the other three Mandalorian-centric shows. Instead, it will be set on Tatooine and is expected to explore Fett’s dealings with the criminal underworld there. Some fans are even hoping for a Han Solo cameo, perhaps via a CGI version of Harrison Ford, similar to what was done with Mark Hamill’s Jedi Master Luke Skywalker in The Mandalorian Season 2 finale episode, “Chapter 16: The Rescue.”

I, for one, am just hoping to see The Ghost — and the entire Ghost crew — in live-action for the first time.

Stay tuned to Inside the Magic for the latest details about all things Star Wars and for up-to-the-minute Mandalorian headlines. With all of the new Star Wars content coming down the pipeline, this is an exciting time for Star Wars fans.